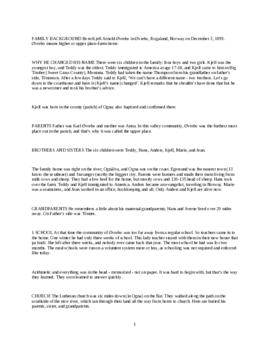 Kjell Øvrebo Thompson was born on December 3, 1899 in Øvrebo, Rogaland, Norway to Karl and Anna Øvrebo. Karl and Anna were farmers and made their living from milk cows and 130-135 head of sheep. There were five other children in the family: Teddy, Hans, Anders, Marie, and Jean. As a child, Kjell attended the Ogna Lutheran Church, which was six miles away from their home. The Ogna Church is an ancient monument, which was completed around 1300 CE. Confirmation in the church was a very important occasion for Kjell. The summer he was confirmed, he and nineteen other children met with the pastor once a week to learn hymns, catechism, the Bible, and other examination items.

After he was finished with school and confirmation, Kjell served in the Norwegian Army, and in late April 1923, he immigrated to America. His brother Teddy was already living in Big Timber, Montana, so Kjell settled there as well. Upon his arrival, Teddy convinced Kjell to change his name from Øvrebo to Thompson, which Teddy derived from his paternal grandfather's name, Tönneson. In Montana, Kjell began sheep herding, which was very popular in the State at the time. After doing that for awhile, Kjell decided to attend college in Grand Forks, North Dakota, where he graduated as a seminary student and met his wife. They were married in Saskatchewan, where her family lived, and then went to Big Timber to ranch.

Kjell's wife was not particularly fond of Montana, and they later moved to Seattle, Washington. In Seattle, Kjell obtained a job with Pacific American Fishery and began sending his summers fishing in Alaska. During the rest of the year, he did carpentry work in Seattle. Kjell has two sons, Gordon and Einar, and he spoke Norwegian to them until they began attending school. He has returned to Norway twice throughout the years, once when the Ogna church was celebrating its 800th plus birthday.