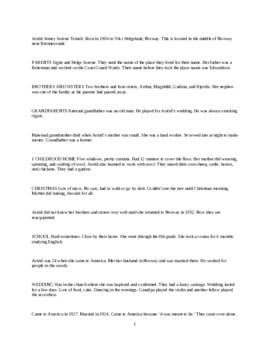 Astrid Tomsli was born in 1904 in Vik, Helgeland, Norway to Helge and Signe Sørene. Astrid's father was a fisherman, and her mother did weaving at home. Including Astrid, there were six children in the family. In 1924, Astrid married Olaf Tomsli, and their wedding lasted for several days. Three years later, the couple decided to immigrate to America. They came over on the Stavangerfjord and took a train from Quebec to Seattle, WA, where they were met by Astrid's uncle, Ole Pederson, and his son. From Seattle, they drove to Westport, OR and took a boat to Puget Island on the Columbia River. Olaf obtained a job at a sawmill, and Astrid became a housewife. When they first moved to the island, it was mostly a Norwegian community, and Astrid was very active in the Norse Hall. Astrid and Olaf had three children: Orville, Sonja, and Reier. All of the children can speak some Norwegian and have visited Norway. Astrid herself has also made return trips, her first in 1952. She did not recognize her home place and got better acquainted with her siblings.