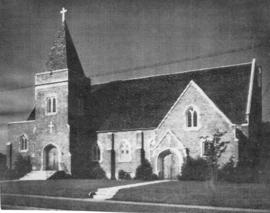 Rev. M. Gjerde came from the Olivet Lutheran Church in Tacoma in 1903 to begin home missionary work in Enumclaw. A group of five families and two single men organized the Scandinavian Evangelical Lutheran Free Church of Enumclaw in December of 1903. This group met in the Danish Lutheran Church of Enumclaw. By July 4, 1908 the church members had dedicated their own church on Griffin Avenue, east of the Enumclaw business district. In 1928 the church members constructed a parsonage and called their first full-time pastor, as they had shared a minister with the Olivet congregation in Tacoma since the church’s founding. Also that year the church was renamed Trinity Lutheran Church.The Ladies’ Aid Society earned the first funds toward building a larger church home. Property was purchased at the corner of Washington and Franklin in Enumclaw in 1941, but because of wartime restrictions construction did not begin until 1945. Dedication was held on December 23, 1947.