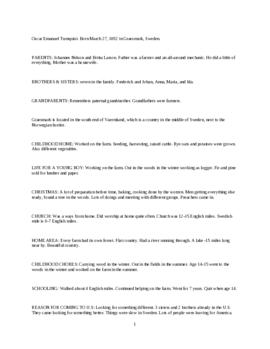 The interview was conducted with Oscar Turnquist on March 30, 1982 Seattle, Washington. This interview contains information on personal background, emigration, employment, church and community life, and Swedish heritage. The interview also provides an article on local oral history projects, including a profile on Oscar Turnquist and mention of Pacific Lutheran University's Scandinavian Immigrant Experience, and a letterhead from Oscar's company, O.E. Turnquist Construction Co. The interview was conducted in English.

Biographical Information Oscar Turnquist was born on March 27, 1892 in Graesmark, Sweden. Oscar lived with his parents and his six brothers and sisters on their family farm. In the warm months, he worked on the farm, but during the winter, he worked as a logger. Oscar attended school for seven years until he was fourteen years old. Since three sisters and two brothers already lived in the United States, Oscar decided he wanted to move there as well. His younger brother sent him a ticket, and Oscar and a friend left for America in September of 1912. In Seattle, Oscar met up with his sister Betty; soon he found a job working on the streetcars. Oscar became involved in Swedish organizations and the Lutheran church. He worked at a dairy for a short time and then as a carpenter with his brother. In 1915, he and his brother had a business transporting people in their Ford, but they returned to carpentry. In 1916, Oscar met his future wife, Sofia Anderson, who was a Swedish-Finn. When the war broke out, Oscar was called into the service and was stationed at Fort Lewis, California, New York, and France, where he spent fourteen months. When he returned from the war, Oscar got married and resumed his carpentry. In 1931, he and Sofia had their daughter Nancy. Oscar began doing commercial work and was contracting for the government; he called his business O.E. Turnquist Construction Company. Oscar built many schools, warehouses, and churches in the Seattle area. In 1972, Sofia passed away; Oscar married a Canadian woman named Jeanette. He has become heavily involved in the Swedish Club, constructing a facility for them and even serving as a trustee and as the president. He sings in their male chorus known as Svea. Besides Swedish Club, Oscar is also a member of the Vaermland Group, the Vasa Lodge and the Masonic Club. He has returned to Sweden six times to visit family. Oscar is proud to be Swedish; King Gustaf of Sweden once bestowed a plaque upon him. Still, he is glad that he moved to America to live his life.