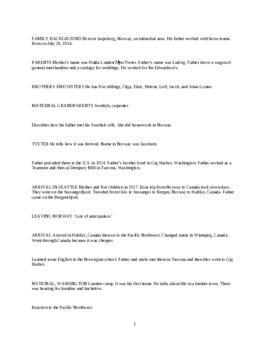 Hans Tveter was born on July 28, 1914 in Sarpsborg, Norway to Ludvig and Hulda Tveter. Hulda was from Bengtsfors, Sweden, and Ludwig met her while she was doing housework in Norway. Ludvig worked with team horses, driving a wagon of general merchandise and a carriage for weddings. In 1924, Ludvig immigrated to the United States and was followed by Hulda and five of their children three years later. The family settled in National, WA, which was a lumber community at the time, and Ludvig obtained a job at the local mill. There was not a Lutheran Church in National, so the family became involved in the Free Methodist Church instead. Hans attended school in nearby Ashford and joined his father at the mill when he graduated from high school. In 1944, the mill closed, and they moved to Tacoma, WA. In Tacoma, Hans became a truck-driver, worked in the meat markets, fished, and remained a bachelor. Hans never joined the Sons of Norway due to the isolation in National, but he is happy about his Norwegian heritage. He has visited Norway and Sweden and remains in contact with his relatives there. Nevertheless, Hans feels that being an American is of more importance, as does his brother Jacob.