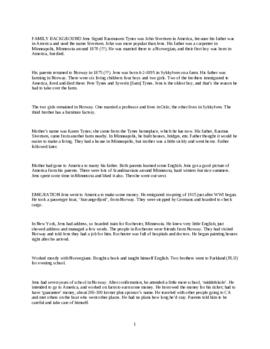 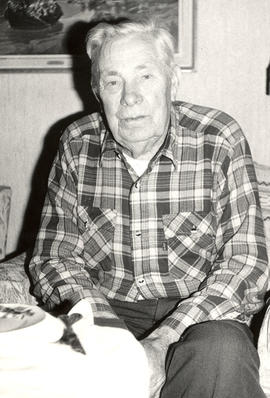 Jens Tynes, known as John Sivertsen in America, was born on April 4, 1885 in Tynes, Sykkylven, Norway. His parents were Rasmus Sivertsen and Karen Jensdatter Tynes. Around 1870, Rasmus was a carpenter in Minneapolis, Minnesota and married Karen there. They returned to Norway around 1875, where Rasmus began farming, and they had six children: Jens, Petter, Louise, Syverin (Sam), Inga, and Bernhard. Jens attended seven years of school and some 'middelskole,' and immigrated to America in spring 1915, hoping to make some money. He spent a year in Rochester, Minnesota, painting houses, and then moved to Eatonville, Washington, where his half-brother, Charlie Sivertsen, lived and worked in a logging camp. There, Jens worked in the woods for awhile, but did not like it due to the risk factor. When America joined the war in 1917, Jens decided to go to Tacoma to work in the shipyards. He was of drafting age, but his work in the shipyards was considered war work, exempting him from the draft. When the war ended, Jens began fishing and working in the canneries in Alaska. He did this for seven or eight years and then began shrimp fishing with his uncle. In 1928, Jens, being the eldest son, had to return to Norway and take over the Tynes homeplace for his parents. He later met Aasta Solberg and was married on June 26, 1936. They had four children: Karen, Reidar, Anne, and Aasa. In 1963, Reidar immigrated to Seattle, and at the time of the interview, Karen still lived in Sykkylven, Anne lived in Spain, and Aasa was in Alaska, working at the canneries. Jens has visited America four times since he has been married, and continues to remain in contact with relatives in America.