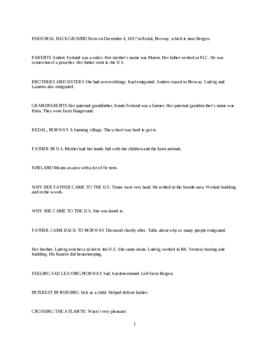 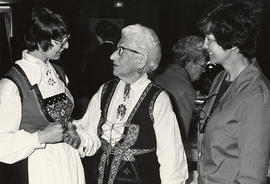 Magdalene Underle was born on December 4, 1887 in Redal, Norway, which is located near Bergen. Her parents were Anders and Maren Førland, and Magdalene was the youngest of eight children. Anders was a sailor and also somewhat of a preacher. At one point, he went to the United States, where he settled in Seattle, WA, but later returned to Norway. In the fall of 1909, Magdalene's brother Ludwig, who was living in Mt. Vernon, WA, sent her a ticket to the United States. She spoke no English and attended Pacific Lutheran College to learn. She also became employed as a housekeeper, and her employer's children helped her with her English as well. In 1910, Magdalene began training at the Swedish Hospital in Seattle, WA and graduated second in her class. During World War I, she went to France as a nurse, and this work enabled her to obtain her American citizenship. After the war, Magdalene visited Norway, and on this trip, she met her husband, Lyder Underle. The couple was married in Mt. Vernon and then went to Draper, SD, where Lyder had a farm. Due to drought, they later moved to Tacoma, WA, where Lyder was a builder contractor and Magdalene worked at Tacoma General Hospital. In Tacoma, Magdalene began attending the Baptist Church, but was not able to join any Scandinavian organizations. She still keeps her Norwegian heritage alive, however, by maintaining Scandinavian traditions and staying in contact with her relatives in Norway.