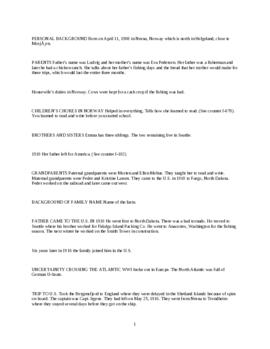 Emma Varney was born on April 11, 1908 in Nesna, Norway, which is located north in Helgeland near Mosjøen. Her parents were Ludvig Mehus and Eva Pedersen Mehus, and Emma had three older siblings: Elias, Henry, and Sigurd. Ludwig was a fisherman, and he immigrated to the United States in 1910, settling first in North Dakota. Due to a bad tornado, Ludwig later moved to Seattle, WA, where his brother lived. Here, he began fishing again and did construction work on the Smith Tower during the winter. In 1916, he sent for his family and had a home ready for them in Frigaria, WA, where he had established a chicken farm. Emma attended her first eight years of school in a one-room schoolhouse and then went to Vashon Island and Seattle for high school. She married James Varney from Quatsino, Canada and has three sons: James H., L. Phillip, and Richard A. Emma is very active in church and is also a member of Nordlandslaget, Norse Home Guilds, the Order of the Eastern Star, and the Leif Erikson League. She has served on the Board of Directors and as Secretary for the Norse Home Guilds, been a Matron for the Order of the Eastern Star, and served as Secretary for the Leif Erikson League. Emma is proud of her Norwegian heritage, but glad that her parents immigrated to the United States.