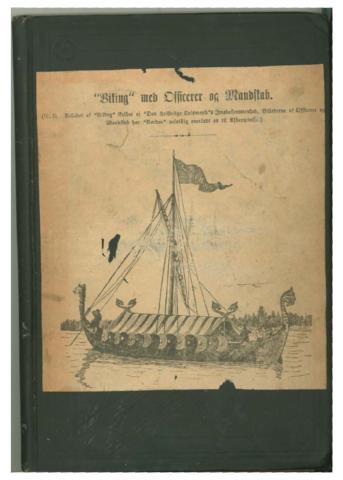 Scrapbook dealing with the history and crew members of the "Viking" with its officers and crew that sailed from Norway across the Atlantic to the World's Columbian Exposition in 1893.

Captain Magnus Andersen was born in Larvik, Norway, on 28 November 1857. He took his mate’s examination when he was 17 years old and was a captain by the age of 22. He tried to cross the Atlantic in an open boat for the first time in 1886, together with Christen Christensen. Due to bad luck and bad weather, they had to turn back with an English ship, only 270 miles from Newfoundland. He started a seaman’s home in New York together with seaman’s priest Hansteen. He was editor of "Norsk Sjøfartstidende" from its beginning in 1889.

First mate Johan Gustav Gundersen was born in Fredrikstad, Norway on February 2, 1850. He worked as a seaman for different companies before the trip with Viking. He was married and had two kids. Second mate Christen Christensen was born in Risør, Norway in 1856 and went to sea 14 1⁄2 years old. He took mate’s examination at 17 years old. He traveled with "Ocean" together with Magnus Andersen in 1886.

The crew-members: Rasmus Elias Rasmussen was born in Bergen in 1854, and was a sailor from 1868. He took the mate’s examination, and he was a member of an expedition from Bergen, Norway to Madagascar, where the plan was to colonize one of the islands there. Oscar Solberg was born in Våler (Solør), Norway in 1856 and became a sailor in 1874. He sailed to many different countries, but sailed mostly around Australia. Fredrik Oscar Frantsen was born in Sandefjord, Norway in 1858 and was steward on the Viking voyage. Johan Eriksen was born in Horten, Norway in 1863. He served in the navy for eight years, before he lived in America for five years. He was also a member of an Arctic expedition.