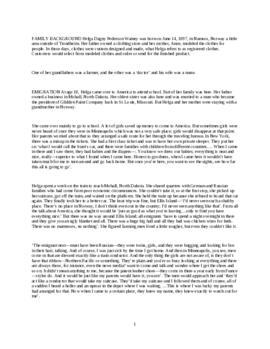 Helga Watney was born on June 14, 1897 in Namsos, Norway, which is close to Trondheim. Her father owned a clothing store, and her mother, Anne Pederson, modeled the clothing for people. By the time Helga was eighteen years old, her father had emigrated and owned a business in Mohall, North Dakota, while Helga and her mother lived with her grandmother in Norway. To further her education, Helga decided to immigrate to the United States around 1915. When she arrived in New York, there was a mix-up with her tickets, and she spent a week on the train before reaching Mohall. At this time, white slavery was a problem, and Helga's family was very concerned about her safe arrival. In Mohall, Helga went to school and housed with a local doctor. After she finished school, she married a contractor by the last name of Watney and had three children. Displeased with the climate in North Dakota, they moved to Tacoma, Washington, where Helga worked for various doctors but not in hospitals since she never became a registered nurse. Helga later became a cook and maintenance person at Pacific Lutheran University. Helga never felt she would benefit from a return trip to Norway and instead invested her money into land and houses that were being sold for tax purposes. At the time of this interview, she had two renters in her home plus rental holdings in University Place, downtown Tacoma, Park Avenue, and Yakima Avenue.