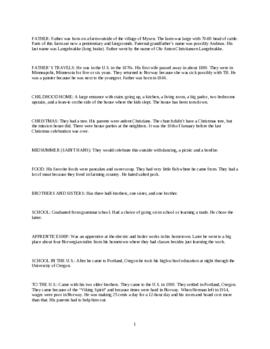 Biographical Information Herman Westby was born on March 17, 1898 in Mysen, Norway, which is approximately 62 kilometers south of Oslo. His parents were Ole Anton Christiansen Langebrakke, who later changed his name to Westby, and Anna Nielsen. Anna was Ole's second wife, and Herman had three half-brothers, one sister, and one brother. The family owned a grocery business, which Herman's mother and sister managed after Ole died in 1910. After Herman finished grammar school, he became an apprentice at the electric and boiler works in Mysen. When World War I broke out in 1914, Herman's mother suggested that he immigrate to the United States, where he already had two brothers living in Portland, OR. Upon his arrival to Portland, Herman immediately started evening school to learn English and later earned his high school degree through the University of Oregon. In 1918, he enlisted in the US service and was put in the motor transport. He was discharged on May 20, 1919, and eight days later, he began working for the Southern Pacific Railroad, which became his permanent career. He also returned to Norway that year for Christmas. Initially, Herman was not sure if he would even return to the US, but his mother sold the business, and Herman brought her and his sister back with him. In 1922, Herman met his future-wife, Ellen Swanson Roren, for the first time at a church service. Ellen's father was Swedish and her mother Norwegian, and she was born in North Dakota. Before marrying Herman, Ellen married Herman's best friend, and had a daughter named Lois. Her first husband died in 1945, and Ellen and Herman were married ten years later. Herman has made two additional trips back to Norway since 1919, one in 1947 and one in 1978, after Ellen passed away. Herman is very proud of his Norwegian heritage but is satisfied with the way his emigration turned out.