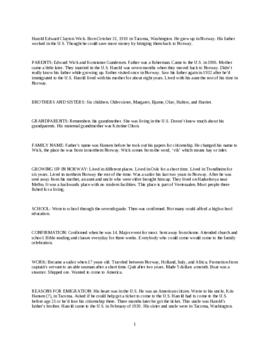 Biographical Information Harold Wick was born on October 31, 1910 in Tacoma, WA. His parents were Edward Wick and Konstanse Gundersen. Edward immigrated to Tacoma in 1906, and Konstanse followed shortly after. Edward thought he could save money by bringing his family back to Norway, and they moved when Harold was only seven months old. Harold has five siblings: Margaret, Bjarne, Olav, Halton, and Harriet. Only Harold and Margaret were born in the United States. When Harold was seventeen, he became a sailor and traveled between Norway, Holland, Italy, and Africa. He quit after two years, and then wrote to his uncle, Kris Hansen, in Tacoma, asking if he would help Harold obtain a ticket to the United States. Harold would lose his American citizenship if he did not come before he was twenty-one years old. He left Norway in February of 1930. The language barrier was a problem at first, but Harold soon found steady work at the Dykeman Mill. He remained at the mill for two years and then got a job for Foss Tug Co, which he stayed with for twelve years. Through the years, Harold has also tried his hand at commercial fishing for two years, but in 1944, he decided to start a contracting business with a man named Reyer. They parted in 1963, at which time Harold began his own construction business. He managed this business until he retired in 1977. Harold met his wife, Dagmar, in 1932 and was married on September 15, 1934. Dagmar was born in Enköping, Sweden. She and Harold had eight children: Roy, Ronald, Wes, Sheryl, Vivian, Elaine, Janet, and Clarine. Harold's Norwegian heritage is very important to him, and he and Dagmar maintained Scandinavian customs within their household. Harold has also visited Norway about thirteen times. At the time of this interview, he was planning on taking all of his children and their spouses to Europe in 1983.