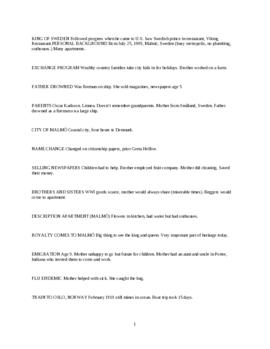 Gretchen Yost, originally Greta Hellive Karlsson, was born on July 25, 1909 in Malmö, Sweden. Her father, who worked as a fireman on a large ship, drowned when Gretchen was nine years old. Gretchen and her brother sold newspapers to help their mother make money. In 1919, Gretchen's mother Linnea decided to take the children to America, where their futures would be brighter. Linnea had an aunt and uncle living in Porter, Indiana who invited them to come. When the Karlssons arrived, Gretchen's mother helped with flu epidemic victims and caught it herself. When Linnea located her brother in Tacoma and her old boyfriend in Portland, Oregon, the family moved to Portland so she could marry her old flame and be closer to her brother. Sadly, not long after, in June of 1920, Gretchen's mother Linnea died of tuberculosis. Gretchen was sent to McChord Air Force Base, and her brother entered the Marines. Her uncle in Tacoma, who worked as a motion picture projectionist, took Gretchen in and sent her to school. However, Gretchen's aunt and uncle forced her out on her own when she was fourteen years old. Gretchen found work at a cafeteria and at Woolworth's for a while. At a church function in 1932, Gretchen met her husband, a Canadian man named Benny Yost. They had three children together. Gretchen enjoys baking traditional Swedish goods; for a short time she even had her own pie baking business. Although she highly values her Swedish heritage, Gretchen has never been back to Sweden and cannot speak the language anymore.