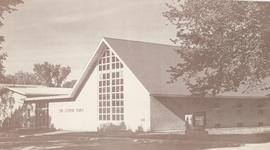 This folder includes a congregational historical record, a 50th anniversary booklet, and a letter from Milton Nesvig.

Rev. Olaf Carlson was installed on July 14, 1918 as the first full-time pastor of this newly formed Norwegian Lutheran Church. Until 1954, the parish consisted of four congregations with one pastor. These were Fairview, Bethel at Cartwright, North Dakota, Four Mile, and St. Peter’s at Sioux Pass. In 1953 Fairview and Bethel decided to go alone and Four Mile voted to dissolve and join in with Fairview. St. Peter’s of Sioux Pass became a part of the Culbertson parish and in 1965 was dissolved. Bethel of Cartwright held its last service in 1970, transferring to the Fairview parish. Due to deterioration of the church building, the congregation built a new structure in 1971.