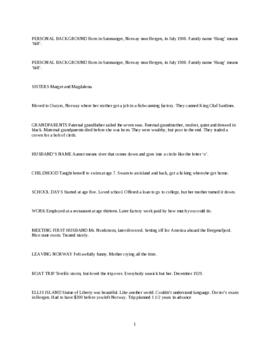 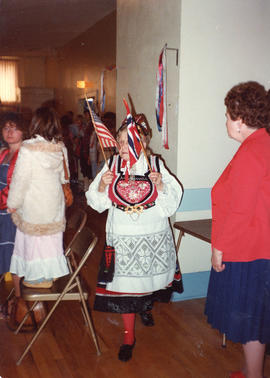 This interview was conducted with Sigurda Aamot on August 7, 1981 in Tacoma, Washington. It contains information on family background, emigration, work, marriage, community activities, personal hobbies, and Norwegian heritage. The interview also contains a poem entitled 'A Prayer for America' by Sigurda, a song entitled 'The Emigrant Women' by Sigurda, and a photograph of Sigurda at Normanna Hall's 17th of May celebration, 1981. The interview was conducted in English with some Norwegian towards the end of the interview. See also Magdalena Haug Krokenes (t234).

Sigurda Aamot was born on July 16, 1908 in Samnanger, Norway to Ragneel Haug and Magdelee Ranghilda Englesdotter Drogheda. She had two sisters: Magdalena and Marget. Sigurda's father died when she was one year old, and the family moved to Osøyro, where her mother began working at a fish cannery. At the age of thirteen, Sigurda began working at a restaurant, and later worked in a factory. Her first husband was Mr. Nordström, with whom she had her son Robert, but they were divorced prior to Sigurda's emigration to America. Sigurda and Robert left for America in December 1929, and upon arrival to the country, they went to Tacoma, Washington, where Magdalena and her husband lived. During her first six years in Tacoma, Sigurda did housework for various families, but was unhappy with this line of employment as it kept her away from her son. In 1935, she found janitorial work, which provided her with better pay and hours. Soon after that, she met Olaf Amot during a dinner party at her sister's house. Olaf was a logger and had changed his name from the original Norwegian spelling of Aamot to Amot upon arrival to the United States (Sigurda herself later returned to the original spelling). Olaf and Sigurda were married in 1936 and had two children: Lynn and Arthur. In 1962, Sigurda joined the Daughters of Norway, and she also took part in Leikaring dance, which was previously involved with in Norway as well. In Tacoma, Sigurda served as a Leikaring instructor and danced at various Norwegian events, including May 17th and June 23rd. Other activities she enjoyed were oil painting and writing poetry. Sigurda returned to Norway on several occasions and was very proud to be of Viking descent. Nevertheless, she loved America and declared that she would stick with the country under any circumstances, including war with Norway.