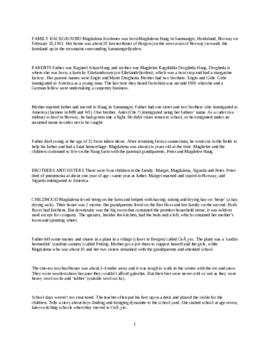 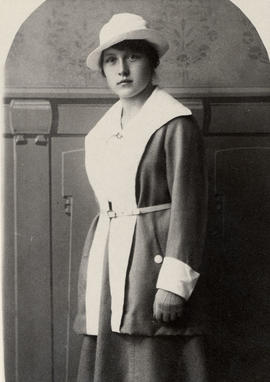 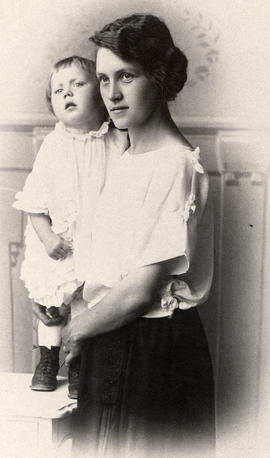 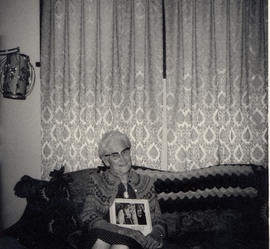 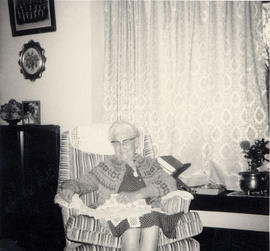 This interview was conducted with Magdalena Krokenes on March 7, 1983 in Tacoma, Washington. This interview contains information on family history, childhood, school, life in Osøyro, Christmas traditions, confirmation, work in Norway, meeting spouse, marriage and family life in Norway after marriage, emigration, settling in and life during the Depression, children, community involvement, return trips to Norway, and Norwegian heritage. Also available are photographs of Magdalena Krokenes as a young woman and Magdalena at the time of the interview. The interview was conducted in English.

Magdalena (Haug) Krokenes was born on February 18, 1903 in Samnanger, Hordaland, Norway, which is on the west coast about twenty kilometers northeast of Bergen. Her parents were Ragneel Johan Haug and Magdelee Ragnhilda Drogheda Haug; her father died at the age of 32 from tuberculosis when Magdalena was about 6 years old. She had two sisters, Marget and Sigurda, and her younger brother, Peter, died of pneumonia when he was around a year old, the same year as her father died. Magdelee and the children continued to live on the Haug farm with the paternal grandparents after Ragneel's death, but the mother later moved to Osøyro, a village closer to Bergen, and got a job in a sardine cannery to support her family; Magdalena, who was about ten years old at the time, and her sisters remained with the grandparents and attended school. The girls eventually moved to live with the mother, and Magdalena was confirmed and went to school in Osøyro.

After confirmation, she worked for relatives for a year and a half before moving to Bergen, where she worked in the YMCA cafe. She met her husband, Valentine Krokenes, at the restaurant below her mother's apartment while she was at home on vacation from Bergen. While they were engaged, she worked as a domestic maid on a large estate in Fjoesanger, a small community west of Bergen. They married in a church in Bergen and then returned to Osøyro to live in a rented apartment; Magdalena did not work outside the home in Norway after marriage. Their daughter, Maalfrid, was born around 1924. Norway was suffering a depression at that time and Valentine lost his job. He thought it would be a good idea to immigrate to America, work for a few years, and then be able to make a new start in Norway with his earnings, so he immigrated in 1924, at which time Magdalena and Målfrid moved in with Magdalena's mother. Valentine got a job logging, first in Cedar Falls, Washington and then with Weyerhauser.

Magdalena immigrated in late June 1928, but she had to leave her daughter with Magdelee because Målfrid had developed meningitis and was too ill to go. Magdalena traveled to the U.S. with Sam Havik and his new wife; they landed in Quebec, Canada and took the train through Canada to Seattle. She then took a boat to Tacoma, where Valentine met her at the Municipal Dock. Valentine worked in the logging camps six days a week and came home on Saturdays, and Magdalena worked as a domestic maid, first for Louisa Taylor and then the Will family; one winter, she also went to night school to learn reading and writing. Målfrid died in 1928 at the age of four, and their oldest son, Walter, was born in Tacoma in 1929; they also had two other sons, Raymond and Kim. Her husband was employed as a logger, except when he lost his job during the Depression and when he worked in the shipyards during WWII; he died around 1983-84.

Magdalena has been active in the PTA, Cub Scouts, and church; she was a Sunday school teacher for many years and was president of the women's group at Emmanuel Lutheran Church. She also belongs to Daughters of Norway. She and her son Kim took a trip to Norway in 1956, and she visited Norway another time with her sister Marget and Marget's daughter.