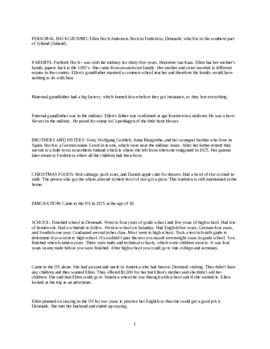 This interview was conducted with Ellen Andersen on April 1, 1982 in Poulsbo, Washington. It contains information on family background, schooling, emigration, employment, marriage, and Danish heritage.

Ellen Andersen was born on December 16, 1906 in Fredericia, Denmark. Her parents were Frederik Johan Hoch and Henriette von Kaas, and there were four other children in the family: Svend, Wolfgang, Anna Margrethe, and Otto. Ellen's father was in the military for thirty-five years, and the family lived in various towns near the military bases. Ellen attended four years of grade school and five years of high school in Denmark, during which she took five years of English. This helped her a great deal when she immigrated to the United States at age eighteen.

She settled in Seattle, Washington and planned to stay for only two years so that she could practice her English and then obtain a good job back in Denmark. Ellen became employed as a housekeeper and participated in Danish Club and church. Her plans to return to Denmark were forgotten when she met her husband, A.V. (Aage) Andersen, at a Danish Club function. Aage was originally from Hornbaek, Denmark. They settled down in the Seattle area and had two children, Elsie and Carl.

Through the years, Ellen has continued to be active in Danish organizations, and she and Aage have visited Denmark seven times. Ellen remains in contact with her relatives there and has maintained traditional Danish customs within her household; particularly those involved with the Christmas holiday.