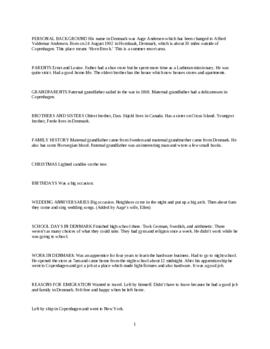 Box 7, File 13A Correspondence and Forms
Checklist and Release Form
Letter from Janet Rasmussen to Mr. and Mrs. Andersen regarding their participation.
Handwritten Tape Archive Sheet and Family Background

Aage Valdemar Andersen was born on August 24, 1902 in Hornbæk, Denmark to Ernst Andersen and Louise Jensen. Ernst owned a shoe store but spent most of his time as a Lutheran missionary. There were four other children in the family: Dan, Skjøld, Else, and Frede. Aage finished high school in Denmark and then became an apprentice in the hardware business for four years.

Aage obtained a good job after his apprenticeship but wanted to travel, which led him to immigrate to the United States in 1924. He stayed in New York City for about one year and then went to Detroit, where he worked for General Motors. Aage then went to British Columbia, where his brothers had immigrated in the meantime. He did harvest work with them for a couple of months before moving to Seattle, Washington, where he got back into the hardware business.

In Seattle, Aage also met his wife, Ellen Hoch, and was married in 1928. Ellen was from Fredericia, Denmark, and they had two children, Elsie and Carl. Aage worked as an electrician at Sand Point Naval Station during WWII, after which he and Ellen bought their own store, where they sold gifts and hardware. Aage also became a storekeeper in Alaska for ten seasons, during which time Ellen managed the store at home. After the store, Aage made another business venture and built a motel in Moses Lake, Washington with a friend named Sigmund Tetten. Aage sold the motel after eleven years, retiring at the age of sixty-six.

After retirement, Aage and Ellen settled in Poulsbo, Washington and bought a motor home. They have visited all fifty states and have also visited Denmark several times. Aage has belonged to the Danish Brotherhood and the Sons of Norway and is proud of his heritage. However, he also feels he is 'as good of a citizen [American] as anybody is going to be.'