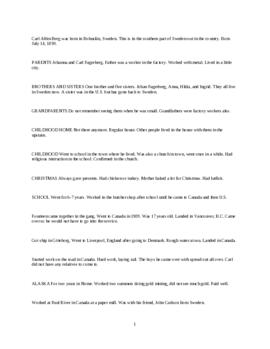 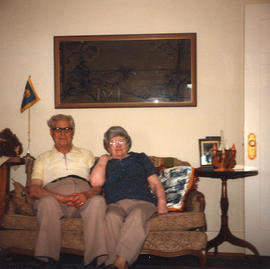 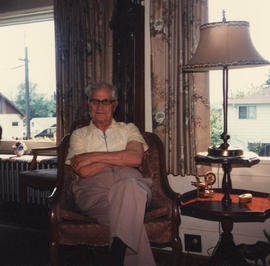 Carl Albin Berg was born on July 14, 1890 in Bohuslän, Sweden. His father worked in a factory to support his family of seven. Carl attended the church in town on occasion and went to school for six to seven years, working at a butcher shop after school to earn some extra money. In 1909 Carl joined a group of young men who wanted to avoid the service by moving to Canada. They left from Göteborg, and eventually Carl reached Vancouver, British Columbia. He worked on road construction crews for a while in Canada, but he later moved to Nome, Alaska to mine gold for two years. Carl then returned to Canada to work at a paper mill on Paul River. After working at the mill, he moved to Seattle in 1916 and was employed by the Bank of California, where he worked for 29 years. At the Swedish Club in Seattle, Carl met his wife, Emmy Erickson, and they had one son, Roy David. Carl has not lost touch with his heritage. He still speaks Swedish and participates in several Swedish organizations: Swedish Club, Vikings, and the Vasa Order of America. In addition, Carl and Emmy took one trip back to Sweden in 1957.