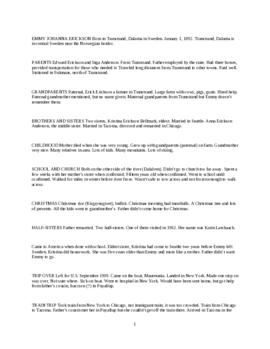 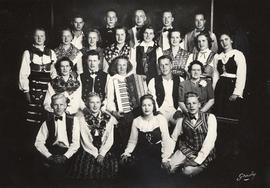 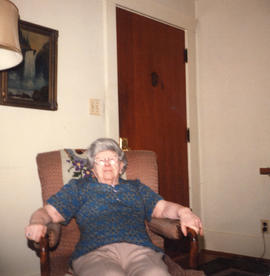 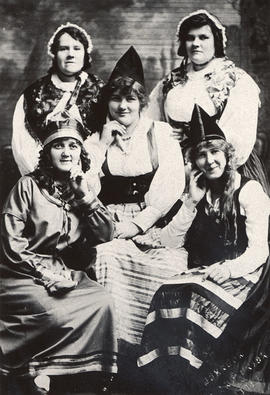 Emmy Berg was born on January 3, 1892 in Transtrand, Dalarna, Sweden to Edward Erickson and Ina Anderson. Edward worked for the state, providing transportation for those in need, and Ina died when Emmy was young. Emmy and her sisters, Kristina and Anna, were raised by their paternal grandparents. Emmy attended school until she was confirmed at age fifteen, and in 1909, she decided to immigrate to Tacoma, WA, where Kristina had settled two years earlier. Emmy spent one year housekeeping in Tacoma and then moved to Seattle with her sister Anna, who had emigrated after Emmy. Emmy continued to do housework in Seattle and then moved to Portland, OR, where she worked for a wealthy family during the day and in an ice cream parlor in the evenings. In 1915, Emmy went to the World's Fair in San Francisco and stayed there for one year before moving back to Seattle. In 1917, Emmy rented a restaurant in Tacoma with a Norwegian woman named Mary Davis. They ran the business for two years. At that time, Emmy married Carl Albin Berg and moved to Port Angeles, where they had their only son, Roy David. They later built a house in Seattle. Roy does not speak Swedish, but Emmy did maintain some of the traditional Swedish cooking. Through the years, Emmy has been very involved in Swedish organizations. She has been the Vice President of the Swedish Club, President of the Vikings, and Financial Secretary of the Vasa Order. Emmy also started a dance group called the Swedish National Dancers.