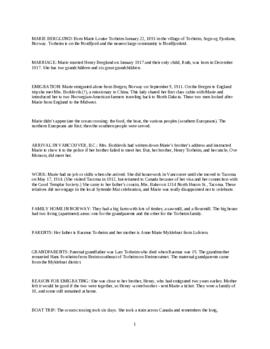 Biographical Information Marie Berglund was born on January 22, 1891 in the village of Torheim, Sogn og Fjordane, Norway. Her parents were Rasmus Torheim and Anne Marie Myklebust. She had nine siblings. On September 9, 1911, Marie emigrated to Vancouver, B.C. because her brother, Henry was here. She did housework in Vancouver until she moved to Tacoma on May 17, 1914 where she worked in a coffee shop. After moving to Tacoma, Marie met Henry Berglund, whom she married in January 1917. They had one daughter, Ruth, who was born in December 1917. Marie got her citizenship in 1922. Marie spent her adult life as a 'professional Norwegian' devoted to maintaining the Norwegian culture, language, and heritage by organizing a children's choir, string band, radio program, scholarship fund, Norwegian language class in public high schools, and a 'barnetog'. She was a member of several organizations, Good Templar Lodge, Daughters of Norway, and the Nordsfjordslaget. Marie received the St. Olaf medal because Mrs. Gunnar Lund nominated her for her leadership in the Daughters of Norway. In 1939, Marie and Henry were part of the group that met meet Crown Prince Olav and Princess Martha. In 1946, Marie spoke with King Haakon for twenty-five minutes. Also in the 1940s, Marie became acquainted with Betzy Alexandra Kjelsberg, a prominent Norwegian feminist.