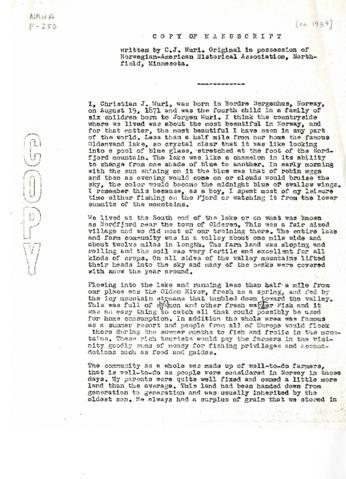 Consists of a copy of the autobiography of Christian J. Muri, born in Norway. It was written around 1939.

Original is in the possession of the Norwegian-American Historical Association, Northfield, Minnesota.

Christian J. Muri was born in Nordre Bergenhus, Norway on 19 August 1871. His father was Jorgen Muri. He has fond memories of Norway and the beauty surrounding the area where he grew up. His family were farmers, growing barley, rye, and oats. They also had a large herd of cattle and sheep.

He started school at the age of seven and finished at age fifteen, when he was also confirmed. His community was very religious. Entertainment consisted of social gatherings and religious meetings as well as sports in the winter months such as skiing and skating. In 1893 he and five other friends bought tickets to Churches Ferry, North Dakota. They found jobs on farms and then a year later he went to Forsythe, Montana, to work on a farm. He filed on a homestead in Butte Valley and built a log house and farmed his land until 1928 when he turned it over to his sons. In addition to farming, he sold nursery stock and sold subscriptions to farm magazines. He was also in the insurance business. He married Marie Bjorle in 1897. They had seven girls and four boys.