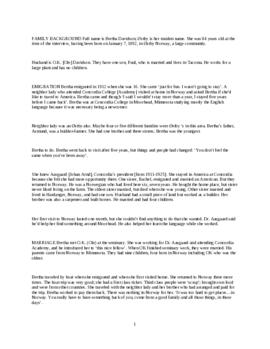 Bertha Davidson was born on January 7, 1892 in Østby, Norway. She was the youngest of four girls and one boy and immigrated to America with a neighbor when she was sixteen. Bertha moved 'just for fun' and did not plan on staying for more than a year but ended up staying for five. The neighbor was attending Concordia College in Moorhead, Minnesota, and Bertha stayed there as well to learn English. When she first returned to Norway, she felt she had changed and nothing was there for her anymore. She returned to Concordia College where she knew Dr. Aasgaard, Concordia's president from 1911-1925. Dr. Aasgaard introduced Bertha to Ole K. Davidson (OK) who was studying at the seminary. When he finished his studies there, the two were married and moved to Glendive, Montana, where they stayed for seven years. Bertha had many responsibilities as a pastor's wife, including entertaining, hostessing, housing other pastors, and heading various church organizations. She also taught Sunday school and sang in the choir, which left her little free time. In Glendive, their son Paul was born. Following Glendive, the family moved to California for five years, where they had several churches in North Sacramento. They later moved to Portland, Oregon and finally to Tacoma, Washington, where they settled for good