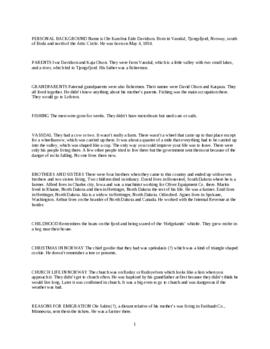 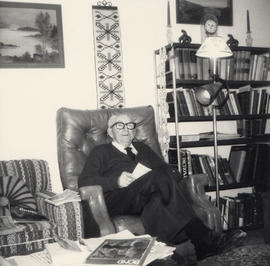 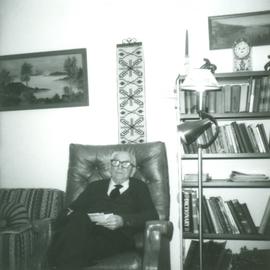 Ole Davidson was born on May 4, 1894 in Vassdal, Tjongsfjord, Norway to Ivar Davidson and Kaja Olson. Before coming to America, there were four brothers in the family: Ole, David, Alfred, and Martin. Ivar was a fisherman, and the family lived in a little valley with Ole's paternal grandparents David Olson and Kaspara, who were also fishermen. Only Ole's family lived in the valley, and in an effort to improve their lifestyle, they immigrated to Minnesota in 1901, where Ole Sabin, a distant relative of Kaja's owned a farm. Upon arrival to Minnesota, Ivar and Kaja worked on Ole's farm in order to pay off the dept for their tickets over. Eventually, they rented their own farm and five more children were born: Emil, Ida, Odin, Agnes, and Arthur.

In Minnesota, Ole attended school through the eighth grade, but did not actually pass his eighth grade examinations. Nevertheless, the minister who confirmed Ole, asked Ivar if Ole could further his education. Ivar agreed providing that Ole attended Waldorf Lutheran Academy in Forest City, Iowa. At the Waldorf Academy, Ole completed the eighth grade and went on to finish high school in three years. L.W. Boe, the President of Waldorf Academy at that time, then suggested to Ole that he attend St. Olaf's college. Money was tight, but Ole managed to pay for his tuition through 1917. At that time, Ole knew he would be drafted for WWI and arranged with the St. Olaf's President to attend a few months of seminary before he had to go overseas.

Ole went overseas in 1918, but caught pneumonia and came home fairly ill. Upon his return home, Ole received letters from both St. Olaf's and the seminary, asking him to finish his education at their respective institutions. Ole chose the seminary and finished in 1920, after which he got his pastorate in Sacramento, California. While at the seminary, Ole had met Bertha Ostby, and after working with his first congregations in Bozeman, Montana, Livingston, Montana and Shields River Valley, Montana for one year, Ole and Bertha were married. They adopted one son, Paul. They stayed in Montana for four years, and then went to Sacramento, where Ole was called into the Civilian Conservation Corps and became a reserve Chaplain in the Army. He served at seven camps between Lake Tahoe and Yosemite Park. Following this, Ole served a congregation in Portland, Oregon and became a member of the Board of Regents for Pacific Lutheran University in Tacoma, Washington.

While living in Portland, Ole also become part of the Oregon National Guard as a Chaplain, and in 1940, they mobilized and Ole spent five years in the service. Two of these years were spent in New Guinea and Australia. When he got out of the service, Ole served at Emmanuel Lutheran Church in Tacoma for ten years, and then spent five years as the manager and pastor of Josephine Sunset Home before officially retiring. After retirement in 1960, Ole became the assistant and visitation pastor Hope Lutheran Church in Tacoma, which lasted for twenty years. Ole claims he won't change anything about his life.