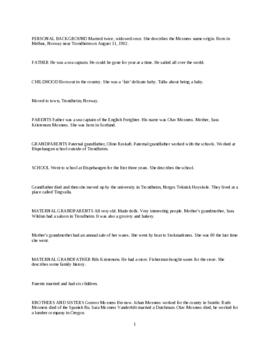 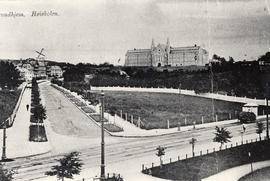 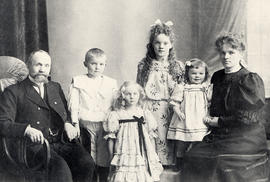 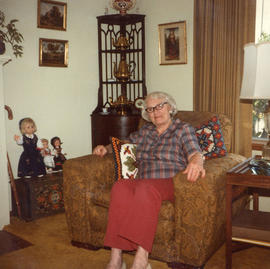 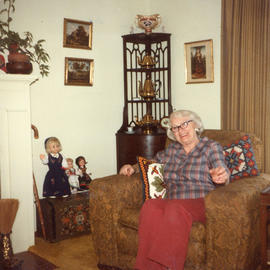 This interview was conducted with Bergliot DeRosa on October 22, 1981 in Tacoma, Washington. It contains information about family background, emigration, work, marriage and family life, and Norwegian heritage. The interview also contains a copy of a photograph taken at Bergliot's mother's aunt's wedding, a photograph of the DeRosa family, a postcard of Trondheim, and two photographs of Bergliot at the time of the interview and a copy of her certificate of vaccination. The interview was conducted in English with some Norwegian towards the end of the interview. Also see Sara Vanderbilt, T115.

Bergliot DeRosa was born on August 11, 1902 in Trondheim, Norway to Olav Johannes Moxness and Sara Petrine Kristensen. Olav was a sea captain of the English Freighter and spent a great deal of time away from the family. In 1918, en route to Australia, the boat he was on disappeared and was never heard of again. In addition to Bergliot, there were five other children in the Moxness family: Gunvor, Ruth, Johan, Sara, and Olav. Bergliot had a very active childhood, which including a lot of skiing and hiking. She was confirmed in the Cathedral in Trondheim and was then sent to Humerskole for four years to learn how to bake, cook, and care for children. In 1914, Bergliot's sister Gunvor immigrated to Tacoma, Washington, and Bergliot joined her in 1922. Eventually, the entire family came. When Bergliot arrived in Tacoma, she already had a housekeeping job, which paid $50 a month. Following that job, Bergliot worked for Everybody's Candy Factory and then as a housekeeper for Dr. Whitaker. In addition to work, Bergliot also went to school to become a citizen and learn the English language, which did not take her very long. Bergliot met her first husband, Fremont Oliver, at Point Defiance. Fremont owned the Oliver Tire Company in Tacoma, and he and Bergliot were married at a local Lutheran Church. They had three children: Ruth (Jones), Rosemary (Duncan), and Fremont. After being sick for two years, Fremont Sr. died in 1946. Bergliot was later remarried to Frank DeRosa, the supervisor for the Tacoma Water Department. Bergliot continued working, cooking in the kitchen at Pacific Lutheran University for one year and then caring for Mrs. Hawkins, the bedridden wife of an attorney at the Country Club. Bergliot was very active in the Daughters of Norway, serving as a Marshall for many years, and was also active in the 17th of May celebration and Leif Erikson committee. She is still fluent in Norwegian and has given many lectures on Norway to various groups. Bergliot has returned to Norway twice, once shortly after Fremont died and once in 1969. In Bergliot's opinion, so much has changed in Norway that it no longer feels like her home. Nevertheless, she claims she is 'just as much Norwegian as when she left Norway.'