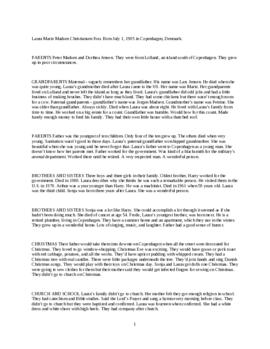 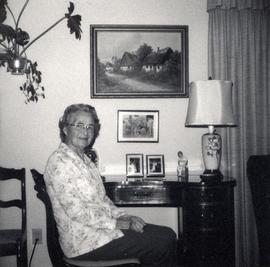 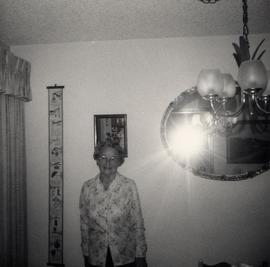 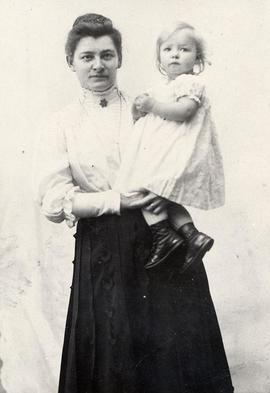 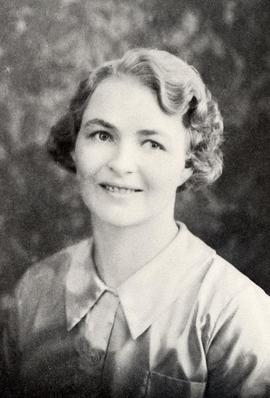 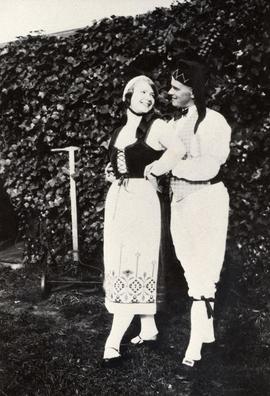 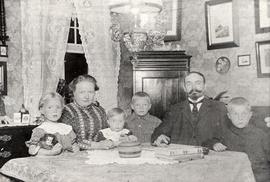 This interview was conducted with Laura Foss on October 20, 1982 in Seattle, Washington. It provides information on family background, emigration, employment, education, marriage and family, community involvement, and Danish heritage. The interview also includes photographs of Laura when she was two years old, Laura with her family when she was four, Laura with her first husband in 1925, Laura in 1934, and Laura and Hjarne Foss at the time of the interview. Also see Hjarne Foss.

Laura Foss was born on July 1, 1905 in Copenhagen, Denmark to Peter Madsen and Dorthea Jensen, who were both from Lolland, Denmark. Laura's father was a blacksmith for the government, and Laura and her siblings had a wonderful home life; there were six children in the family including Laura. Laura was confirmed when she was fourteen years old and then got a cleaning job with a local family. Laura worked for them until she decided to immigrate to America in January 1921. She came over with her cousin, Greta, from Germany, and they settled in Seattle, WA, where Laura's aunt and uncle, Hans and Marie Pedersen, lived. Laura stayed in Seattle for two months, until deciding to stay with her uncle, Olaf Madsen, in Mt. Vernon, WA. She stayed in Mt. Vernon for two months as well and then returned to Seattle to help care for her aunt, who was a diabetic. In the fall of 1921, Laura got her first job in the United States, in which she helped with childcare and housekeeping for the Russell family. At this time, she also attended night school at Broadway High School in order to improve her English. The following spring, Laura started to attend church and a Danish society for young people. These activities provided Laura with more of a social life, and the church was where she and Greta learned of the Danish 'folkskole' in Solvang, CA. They attended for one school year (October - March) and had lectures, gymnastics, folk dancing, handcrafts, and Bible classes. While in Solvang, Laura met her first husband, Harald Christiansen, who was doing carpentry work for a contractor in town. Harald was also from Denmark and had attended the school a year before Laura. When Laura was done with school, she and Harald moved back to Seattle and were married April 8, 1925. They had two children, Paul and Norma, and maintained Danish traditions within their household. In 1930, Laura and Paul visited Denmark for five months, and in 1948, the whole family went. Both of the children can speak Danish. In 1965, Harald died of a heart attack, and Laura took another trip to Denmark. On this trip, she met up with Hjarne Foss, who was also visiting from Seattle. They were married in 1967.