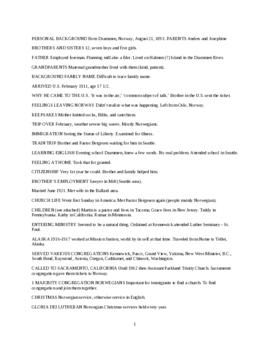 The interview was conducted with Theodore Gulhaugen on April 22, 1980 at Trinity Lutheran Church in Tacoma, Washington. It contains information on personal background, emigration, life as a pastor, teaching, meeting King Olaf, and Norwegian heritage. The interview also contains articles on the American Lutheran Church (The Lutheran Standard, April 1, 1980), the five generations of the Gulhaugen family to enter the Lutheran ministry, the Gulhaugen family's 75-year legacy at PLU, and Theodore Gulhaugen being PLU's oldest Homecoming alum (Mooring Mast, October 29, 1982). The interview was conducted in English.

Theodore Gulhaugen was born on August 21, 1893 in Drammen, Norway. His parents were Andres and Josephine Gulhaugen, and there were twelve children in the family, including Theodore. Andres was a foreman at a planing mill. In February 1911, Theodore decided to immigrate to America. Going to America was a common subject of conversation at that time, and one of Theodore's brothers in America sent him a ticket. Theodore traveled to Seattle, Washington, where his brother and Pastor Bergesen met him.

Theodore was later called to Sacramento, California, where he remained until 1962 before coming to Trinity Lutheran in Tacoma, Washington. In Tacoma, Theodore has held Norwegian Christmas services and taught Norwegian at Franklin Pierce High School and Tacoma Community College. In 1976, he served on the welcoming committee and arrangement of a banquet for King Olav, who came to Seattle to celebrate the 150th anniversary of Norwegians coming to the Northwest.

Theodore has also returned to Norway and continues to remain in contact with his relatives there. Theodore is very thankful for his Norwegian heritage, but has always felt welcome in America and believes he has had a good life here.