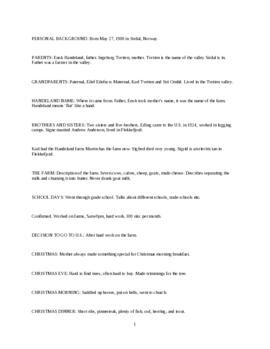 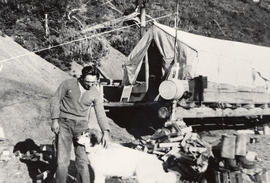 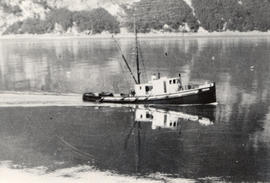 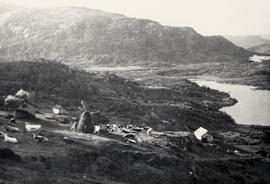 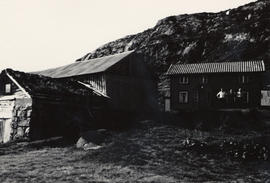 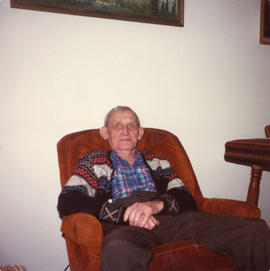 The interview was conducted with Torvald Handeland on October 27, 1981 in Tacoma, Washington. This interview provides information on family history, life on a Norwegian farm, schooling, decision to move to the U.S., Christmas traditions, fishing experiences throughout life, voyage to America, jobs and changes in the fishing and logging industries, citizenship process, visits to and changes in Norway. The interview also contains photographs of Cook Inlet, Alaska (late 1930s), Gravatn stöl, Torvald Handeland's home in Sirdal, Norway (summer 1981), and Torvald and his wife Martha at the time of the interview. The interview was conducted with English with some Norwegian towards the end of the interview. Also see Martha Handeland.

Biographical Information Torvald Martin Handeland was born on May 27, 1908 in Sirdal, Norway, the son of Enok Handeland and Ingeborg Tveiten. He had two sisters and five brothers. He went through grade school, was confirmed, and then worked on farms, where the work was long and hard. He came to America in September 1928 when he was 20, reaching Ellis Island via Southampton, England. He took a train from New York to Seattle and on to Tacoma, where an aunt lived. He got a job on the tide-flats working with green lumber, but he disliked it and got a different job at a logging camp near Enumclaw, WA. In the summer, he got a job on a fishing boat in Cook Inlet, Alaska, which started a pattern, that last most of his life-fishing in the summer and logging the rest of the year. He obtained citizenship in 1938, and met his wife, Martha Tweiten, for the second time at Valhalla Hall. He returned to Norway to visit his mother in 1954.