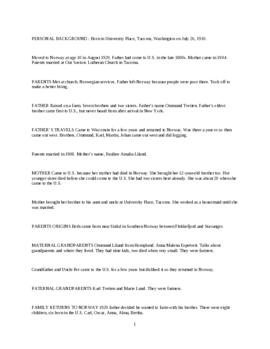 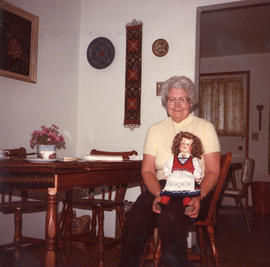 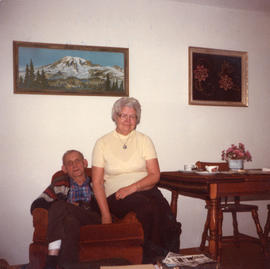 The interview was conducted with Martha Handeland on October 27, 1981 in Tacoma, Washington. This interview provides information on parents' life in Tacoma before moving back to Norway in 1920, family background, voyage to Norway, life and schooling in Norway, American-Norwegian Christmas traditions, household responsibilities, return trip to Canada and Seattle, life in Tacoma, marriage, children's lives, maintenance of Norwegian traditions. It also contains a photograph of Martha Handeland and a photograph of Martha and her husband Torvald. The interview was conducted in English with some Norwegian towards the end of the interview. Also see Carl Tweiten, Anna Hopen, and Torvald Handeland.

Martha Tweiten Handeland was born on July 26, 1910 in University Place, Tacoma, WA. Both of her parents were originally from near Sirdal in southern Norway, between Flekkefjord and Stavanger. Her father, Ommund Tveiten, came to the U.S. in the late 1800's and her mother, Pauline Amalia Liland, came in 1904; they were married in Tacoma. Martha was the second oldest of eight children, of which six were born in the U.S. When she was 10, her father decided he wanted to farm with his brother, and the family moved back to Norway in August 1920. She returned to the U.S. at age 17 1/2 with her older brother Carl, leaving Norway on April 14, 1928. They traveled through Liverpool and Halifax, England and landed in Quebec, Canada. They took a train from Quebec to Vancouver B.C. and then a boat to Seattle, after which they lived on a farm in Tacoma with their aunt Bertha. Martha's brother Oscar returned to the U.S. in 1929, her father in 1930, and her mother and remaining five siblings came in 1931. During this time, Martha was a maid and did housework for various people. She met her husband, Torvald Handeland, whom she knew from Norway, and they were married by Reverend Michelson in a Norwegian service at Messiah Lutheran on October 1, 1938. They had three children: Einar Ingvald, born on January 14, 1943; Pauline Olivia Campbell in September 1944; and Arne Melvin on October 1, 1946. Einar is an engineer at Tudor Engineering in Seattle; he and his wife, Marilyn Jones, a teacher, have two adopted children. Pauline married John Campbell, a chemical engineer for Weyerhauser, in 1968, and now lives and teaches in Aberdeen, WA. Arne lives in University Place and teaches at Curtis High School in Tacoma; his wife is Andrea Holmes. Martha's family has been active in the church and all were baptized and confirmed Lutheran. She now attends Gloria Dei Lutheran. She has been involved in Norwegian organizations-Normanna, Valhalla, and Embla Lodge-since 1930. She and her husband had a motel for eighteen years, her children helped out with it. She has maintained Norwegian traditions within her family, and her children were taught Norwegian.