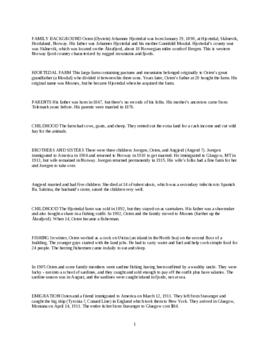 The interview was conducted with Osten Hjortedal on August 22, 1984 in Spokane, Washington. This interview contains information on family background, childhood and fishing in Norway, emigration and Ellis Island, settling in, work in railroad, learning English, WWII, citizenship, transportation, marriage, Scandinavian community in Spokane, church, return trips to Norway, pride in Norwegian heritage. The interview was conducted in English with some Norwegian towards the end of the interview. Also see Hjortedal, Gjertine, t274.

Osten (Øystein) Johannes Hjortedal was born on January 29, 1890 at Hjortedal, Skånevik, Hordaland, Norway. His parents were Johannes (Mosness) Hjortedal and Gunhild Mosdal, and he had two siblings, Joergen and Angjerd. The family sold the Hjortedal farm in 1892 but stayed on as caretakers, and moved to Mosness in 1902. Osten became a fisherman when he was 14, and during winter, he worked as a cook on Utsira, an island in the North Sea. He emigrated with his friend Lundval on March 12, 1911, went through Ellis Island, and arrived in Glasgow, Montana on April 14, 1911. The next morning, a friend of Osten's brother gave them a job with the railroad, and within a year, Osten was a part-time 'relief' foreman. He was granted citizenship in 1917, and in 1921, he spent four months visiting his parents in Norway. He moved to Edwall, Washington in August 1922, and met his wife, Gjertine, at a friend's house in Glasgow while on the way to visit Norway in Christmas 1925. They married in 1928 in Chicago, where she worked as a nurse in Cook County Hospital, and had two children-Gladys in 1929 and Erling in 1931. Osten joined Sons of Norway, and took two more visits to Norway in 1966 and 1968.