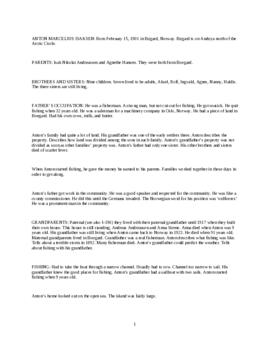 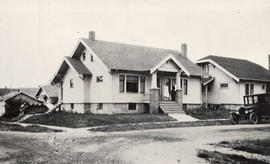 The interview was conducted with Anton Isaksen on April 5 and 6, 1982 in Tacoma, Washington. This interview contains information on family history, life and fishing in Norway, emigration and reasons for emigrating, voyage to America, Ellis Island, train trip to Tacoma, arrival in and first impression of Tacoma, language difficulties, fishing in the U.S., working in a sawmill and logging camp, changes in fishing, marriage and family, and trips to and changes in Norway. The interview also contains an article on Captain Anton Isaksen, a letter written to Anton and Olive Isaksen by their daughter Mrs. J. Robert Howard on their 40th anniversary (May 1968), and photographs of Anton and Olive as a young couple and their house in Tacoma, WA. Also see Olive Isaksen.

Biographical Information Anton Marcelius Isaksen was born on February 15, 1903 in Bøgard, Andøya, Norway. He was one of nine children, of whom seven lived to be adults, and his parents were Isak Andreassen and Agnethe Hansen. Anton started fishing when he was 9 and became a professional fisherman at age 14 after he was confirmed. When he was 16, he got a job on a big herring steamer, and he fished in Haugesund in southern Norway the last two years before he emigrated. He left from Bergen on the 'Stavangerfjord' on February 3, 1923 and arrived in New York on February 13. The train trip from New York to Tacoma, where an aunt lived, took six days. He worked for a fishing camp on Whidbey Island, WA for two to three months; at a sawmill in Everett, WA for a month; and at a logging camp in Bellingham, WA. He then got a job through his uncle fishing for halibut from 1924-29. He met his wife, Olive Margrethe Torgersen, in Tacoma; she was born in Norway and worked in a logging camp near Tacoma, and they married in 1928. They had four daughters-Annie, Olive, Inez, and Annette-and two sons, Anton Martin, who died at birth, and Anton Marvin, who died of a head injury after falling out of a tree when he was 10. Anton did not work for a month and a half after his son died, and then his boat got stuck on rocks when the tide went out and sunk while it was being towed to Ketchikan, AK. He decided he should not fish anymore and got a job at a plywood plant in Tacoma after New Years 1955. He started fishing again when a friend got a new boat and then took a year off after he developed appendicitis while on a boat out of Prince Rupert; he also started running herring boats for other people. He became part owner of a boat, the Nordic Pride, for the first time in 1941, and he has been captain on many boats. He has taken three trips to Norway-the whole family went in 1946, and he visited again in 1954 and 1970.