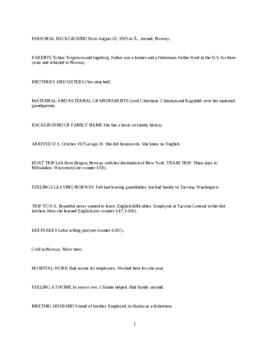 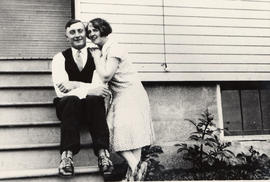 The interview was conducted with Olive Isaksen on April 26, 1979 in Tacoma, Washington. This interview contains information on family history, emigration, voyage to America, learning English, work in the U.S., keepsakes, marriage, children, maintenance of Norwegian language, Scandinavian foods, differences between the U.S. and Norway, church life, hobbies, and trips to Norway. The interview was conducted in English with some Norwegian towards the end of the interview.

Olive M. (Torgerson) Isaksen was born on August 10, 1905 in Ålesund, Norway, and was one of eight children by Ingeborg and Tobias Torgerson; her father was a farmer and fisherman. Olive emigrated in October 1925, leaving from Bergen, Norway. She had family in Tacoma and worked for one year in the diet kitchen at Tacoma General Hospital, where she learned English.

Her husband, Anton Isaksen, was a friend of her brother's and fished in Alaska, and they had four daughters and lost two sons. Olive attends the Lutheran church and is a member of Circles, Ladies Aide, and Senior Citizens, and her husband is a member of the Elks. She has visited Norway several times, once staying for ten months.