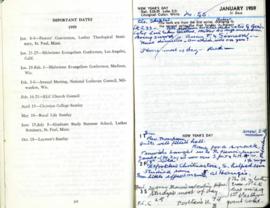 Johan Ulrik Xavier was born to Nils Paul and Amanda Magdalane Xavier on June 26, 1870 in Lyngen, Norway. The second son of a family of ten, he and his family immigrated to the United States three years after his birth in 1873. They became naturalized citizens of the United States in 1878.

Johan Ulrick was first educated in a rural elementary school for seven years but then moved on to Luther College Preparatory, where he studied from 1885 to 1888. He took his Bachelor of Arts degree in 1893 from Luther College, Iowa. He earned his Theological Degree from the Luther Seminary in Saint Paul in 1898. He completed his graduate work during the summer at both the University of Minnesota and the University of Washington, which ended when he achieved his Master of Arts Degree from the University of Washington on 1929. In 1953, Professor Xavier received his honorary Doctorate in Divinity from Pacific Lutheran College.

Dr. Xavier began teaching at the Lutheran Ladies Seminary in Red Wing Minnesota between 1900 and 1902. He quit when they would not give him the raise he asked for and he accepted the call from Pacific Lutheran Academy. He taught there until 1906, when he again quit because the school would not give him the raise he asked for. He spent the year teaching in a one room school house in Oak Knoll or Muck Creek. In 1908 he returned to Pacific Lutheran Academy and continued working until the school shut down for a few years in 1917. He earned his living at a number of odd jobs and eventually settled down to work at a wholesale grocers’ named Younglove. When the school re-opened in 1920, Dr. Xavier returned and because he was now the most senior member of the staff, he acted as president for the first year that Pacific Lutheran College was open. From 1921 to when he retired in 1942, Dr. Xavier taught a wide variety of classes as well as serving as the school’s librarian. He was an assistant pastor to his father in 1901 and to a number of other Lutheran pastors throughout his life. It is also reported that Dr. Xavier and his father worked together in publishing the Pacific Lutheran University Heralds for many years.

It was at Pacific Lutheran Academy that Dr. Xavier met his future wife, Signe Skattebol, who was a teacher and the women’s basketball coach. He proposed to her in 1910 and they married on December 27, 1912. They adopted their first child, Olaf Paul Xavier on July 24, 1919 and their second child, Barbara Ruth Xavier on May 17, 1922. Dr. Xavier died in 1963 in a Stanwood Retirement Home at the age of 93.

The Papers of Johan Xavier contains materials related to Xavier's time as a student at Luther College and Luther Seminary and his work at Pacific Lutheran Academy as the librarian from 1908-1918 and as acting president from 1920 to 1921. Also included in this collection are several cash ledgers kept by Xavier to track his finances.

The Papers are divided into three series. The first series contains diaries that Xavier kept from 1892 to 1960. The second series contains Xavier’s personal papers and newspaper clippings that he collected throughout his lifetime. The last series, educational papers, contains many of Xavier’s exercise and notes on English, Norwegian, and the Bible.