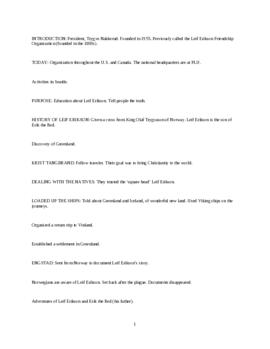 The Leif Erikson League was founded in 1955 and was previously known as the Leif Erikson Friendship Organization, which was founded in the 1800s. The League exists in both Canada and the United States, and its national headquarters are at Pacific Lutheran University in Tacoma, WA. The purpose of the organization is to educate people about Leif Erikson. Leif Erikson, the son of Erik the Red, discovered Greenland and Iceland while on a journey to spread Christianity throughout the world. October 9 has been declared Leif Erikson Day. At the time of this interview with Mr. Nakkerud, League Membership was 22,000, and the lodge officers in Seattle were Trygve Nakkerud-President, Austin Nordheim-Vice President, Mrs. Emma Mehus Varney-Secretary, Trygve Jorgensen-Treasurer, and Commander Carlin Moe-Historian.