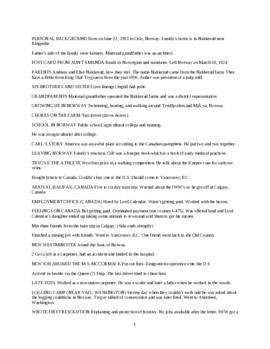 The interview was conducted with Trygve Nakkerud on May 27, 1981 at Pacific Lutheran University in Tacoma, Washington. It contains information on family background, emigration, work, union activities, community activities, and marriage. The interview also contains: a postcard from Trygve, a program from Leif Erikson Day (1968) from the Norway Center in Seattle, Washington, minutes from a special board meeting at the Norway Center (January 5, 1972), an article on Trygve receiving the Ballard Exchange Club's 'Outstanding Senior Citizens Award,' correspondence with the Seattle Post Intelligencer, correspondence with the US Senate, articles on the fisheries in the Northwest, an article on Trygve and his real estate business, and an article on him from the Western Viking. Also see Amanda Nakkerud. The interview was conducted in English.

Trygve Nakkerud was born on June 22, 1903 in Oslo, Norway to Andreas Nakkerud and Elise Bloch. Andreas was the President of a pulp mill and owned two farms. There were six children in the family, including Trygve: Ingrid, Sverre, Mads-Egil, Trygve, Eilert, and Ruth. Trygve attended public school and then went on to Agricultural College and training. In 1924, he decided to emigrate, but could not buy a ticket to the United States and went to Calgary, Alberta instead. In Calgary, he was hired by Lord Calendar to work with his horses, but when he failed to pay Trygve, Trygve left. He then went to New Westminister, British Columbia, where he joined the Sons of Norway and got a job as a carpenter. After this job, Trygve got a job extinguishing fires on the M.S. McCormack and then moved to Seattle, Washington. In the late 1920s, he worked as a non-union carpenter and later as a logger. At a logging camp near Vail, Washington, Trygve was asked about the logging conditions in Norway, and after he talked about conservation, he was fired. From there, he went to Aberdeen, Washington and wrote his first resolution on replanting and protection of forestry, after which he was unable to find any jobs. Trygve then began fishing in the Bering Sea and wrote two more resolutions, one of which Senator Jackson took to Washington D.C. In 1948, the Seafarers International Union of North America asked Trygve to be their International Representative. Trygve was active in the Union for thirty-two years. Trygve has also been a member of the Denny Park Lutheran Church, the President of the Leif Erikson League, and the 17th of May committee treasurer. Trygve married Inga Amanda Treland, originally from Lyngdal, Norway, and had three children: Elise, Gladys, and Arnold. The family settled in Seattle, Washington. Trygve has enjoyed life and his accomplishments.