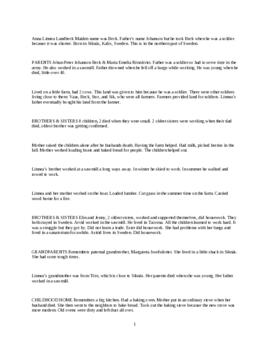 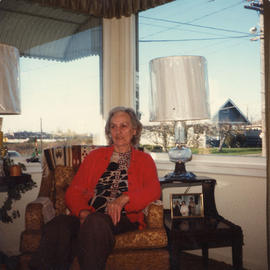 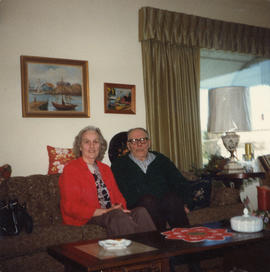 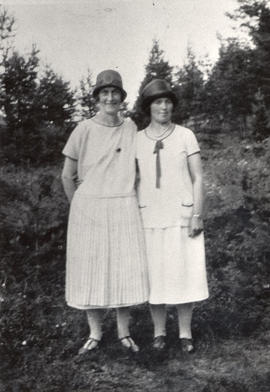 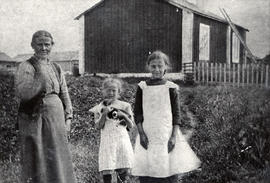 The interview was conducted with Anna Linnea Lundbeck on February 5, 1982 in Tacoma, Washington. This interview contains information on personal background, employment, emigration, church and community life, family, travel, and Swedish heritage. It also provides photographs of Linnea's home in Sweden, Linnea as a young woman, and Linnea and her husband Emil at the time of the interview. The interview was conducted in English. Also see Emil Lundbeck (t138).

Anna Linnea Beck Lundbeck, known as Linnea, was born on May 27, 1899 in Siknäs, Kalix, Sweden. The Beck family, which included eight children, lived on a small farm provided for them since Linnea's father, Johan Beck, was a soldier. Sadly, Johan died at an early age after falling off a barge. The children worked a great deal to support the family. Linnea attended school for six years and then was confirmed. Her family celebrated Christmas in a traditional way, but they did not attend church as is customary because their farm was too far away. Linnea worked as a housekeeper for a while before she moved to America. Her brothers encouraged her to come, so she moved when she was 28 years old. Linnea took a ship called the Gripsholm and then took a train to Tacoma to meet one of her brothers. Soon Linnea found several jobs as a housekeeper. In Tacoma she met her future husband, Emil Lundbeck. They lived in Seattle for a brief period of time and then returned to Tacoma; Linnea and Emil had one son named Floyd. Shortly thereafter, Linnea attained her United States citizenship. She has returned to Sweden once, and while Linnea enjoys living in America, she maintains several Swedish customs. For instance, she still speaks the language and prepares traditional Swedish food, especially during the Christmas season. Linnea also treasures some of the Swedish keepsakes that she has brought over from Sweden.