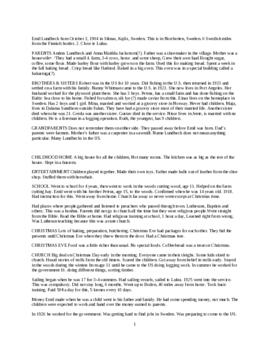 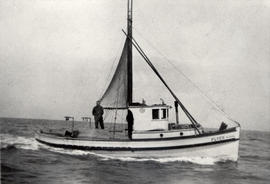 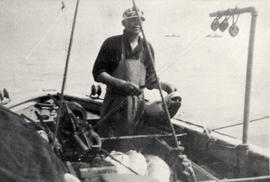 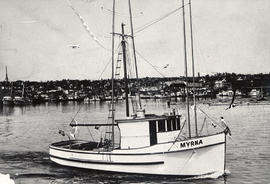 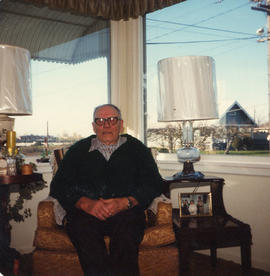 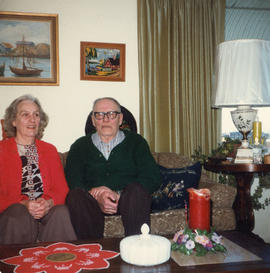 The interview was conducted with Emil Lundbeck on February 5, 1982 in Tacoma, Washington. This interview contains information on personal background, employment, emigration, family, Swedish organizations, and Swedish heritage. The interview also provides a newspaper clipping and photographs of Emil's first boat (1929), Emil salmon fishing (1929-1930), Emil's last boat (1947), and Emil and his wife Linnea at the time of the interview. The interview was conducted in English. See also the interviews with Emil Lundbeck's sister, Nannie Whitman (t166), and Emil's wife, Anna Linnea Lundbeck (t139).

Emil Lundbeck was born on October 3, 1904 in Siknäs, Kalix, Sweden. Emil's father Anders was a shoemaker in the village while his mother Anna Matilda Jackström was a housewife. The Lundbeck family, which included twelve children, grew their own food on their small farm. Emil attended school for four years and then began working in the woods at age 11. He learned about the Lutheran church in school and was confirmed at the age of 14. His family enthusiastically took part in the traditional Christmas festivities that included decorating, baking, and giving gifts. The 'old timers' scared the children with their troll stories. Emil turned from logging to sailing when he was 17 years old. In 1925, he briefly joined the service. He had a difficult time finding work, so he decided to move to America as one brother and one sister had done. Emil had to write to the King of Sweden to get permission to immigrate to the U.S. He left aboard the 'Stockholm' in 1927 when he was 22 years old and settled in Tacoma. Emil found work in logging camps but soon bought his own boat in order to support himself by fishing. In 1933, Emil moved to San Francisco to find a better job, but he returned to Seattle shortly thereafter, finding employment as a longshoreman. The following year, Emil married Anna Linnea Beck, Linnea to her friends, whom he met at the Old Swedish Club. They had one son named Floyd in 1936. Emil suffered a serious accident in 1939 when he was loading steel; the metal slipped and punctured his heart and scarred his lungs. He could not work for three years. After mostly recovering, Emil returned to fishing and had his own boat built in 1947. In 1952, Emil and Linnea moved to Tacoma after Emil sold his boat. He bought a share of North Pacific Plywood, where he worked until he crushed his hand in another debilitating accident. Emil returned to Sweden once in 1956 and continues to maintain the language and the traditions in America. His wife cooks traditional Scandinavian food, and Emil belongs to Valhalla.