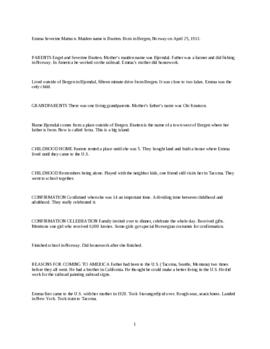 Emma Mattson was born on April 25, 1913 in Bergen, Norway. Her parents were Engel and Severine Bratten, and she was an only child. Engel was a farmer and fisherman, and Severine did housework. Emma was confirmed when she was fourteen years old, which was considered a time for great celebration, marking the division between childhood and adulthood. After her confirmation, Emma finished school and began doing housework. Emma's father had visited Washington and Montana, and in 1928, the family immigrated to Tacoma, WA, where Engel thought he could make a better living. He found work painting railroad signs. Emma did not want to leave Norway, and the language barrier proved to be a problem for her when she first arrived. She attended classes at Central High School to learn English and obtained part-time housekeeping jobs. In 1936, the family returned to Norway, but by that time, Emma had grown fond of Tacoma and returned alone one year later. Upon her return, she found a housekeeping job in the home of Karl Haymond, who owned the KOMO radio station. In December 1938, Emma married Matt Mattson, who was a logger and fisherman. They had three children: Shirley, Kenneth, and Dennis. In 1947, Emma took her family back to Norway for a year, but since the war had just ended, times were hard and rationing was still occurring. Emma continues to enjoy visiting Norway but would never want to live there permanently. In Tacoma, she maintained some Norwegian customs, such as preparing traditional foods for her family, but she never belonged to a Scandinavian organization.