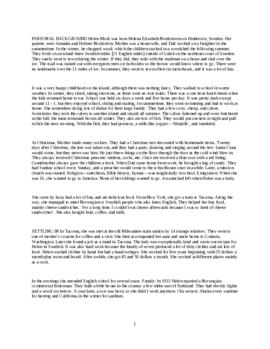 Helen Mork was born Helena Elizabeth Nordström on November 11, 1910 in Hindersön, Norrbotten province, Sweden. Helen's family, which included six brothers and sisters, lived on an island on the northeast coast of Sweden. Helen says she had a very happy childhood and enjoyed celebrating Christmas with the traditional decorations and food. At the young age of 16, Helen decided she wanted to move to America. She met her aunt and uncle in Graham, Washington and then moved to Tacoma, finding a job as a housekeeper. In 1933, Helen married a Norwegian fisherman named Ola Mork, whom she met at night school; they built a house and settled in Parkland, Washington, where they lived for nine years. In 1934, Helen and Ola had their first child, Erling. Soon thereafter, Helen became an American citizen. The family visited Norway and Sweden in 1937. They had one more son, Harold, and a daughter, Eleanor, before moving from Parkland to Tacoma in 1942. Helen continued to work as a housekeeper until the kids were in school, at which time she catered for wealthy families in the area. When Eleanor was 16 years old, they returned to Sweden and Norway for a summer. Helen and Ola traveled to Scandinavia themselves in 1962, 1970, 1975, and 1981. All of Helen's siblings still live in Sweden, and she has maintained close contact with them. Helen belongs to the Swedish Club, Vasa Lodge, and Sons of Norway; she can still speak Swedish and reads Swedish magazines.