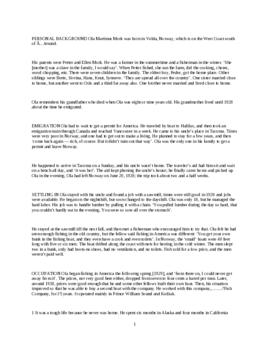 Ola Mork was born on July 22, 1909 in Volda, Norway. His father, Petter, farmed in the summer and fished in the winter. While he was out fishing, Ola's mother Ellen ran the farm. There were seven children in the family: Berte, Peder, Ola, Sivrina, Synneve, Hans, and Knut. When Ola was fourteen years old, he began fishing with his father. The fishing boats were small, men had to sleep two to a bunk, there were no toilets, and they were not paid very well. When Ola was eighteen, he decided to immigrate to America and was the only one in his family to obtain a permit to leave Norway. Once in America, he stayed with his uncle in Tacoma, Washington and found employment at a sawmill. He worked there until the following fall when he met a fisherman who encouraged Ola to try fishing in America. He began fishing in the spring of 1929 and made it his occupation. For the first nine years, prices were rather poor, but were good enough by 1938 for Ola and some other fishermen to built their own boat. When prices improved even more, Ola was able to buy another boat and continued working with this company for the next thirty-five years. He spent six months in Alaska and four months in California fishing for sardines. Ola had married in 1933, and his work schedule made it difficult to spend much time with his family. Ola and his wife, Helen, had three children: Erling, Harold, and Eleanor. When the boys were old enough, they fished with Ola during the summers. Ola and Helen, who was born in Hindersön, Sweden, have returned six times and think it has changed a lot throughout the years. Ola feels that too many different people are moving to Norway. At home, the couple belongs to several Scandinavian lodges and still speak Scandinavian with each other.