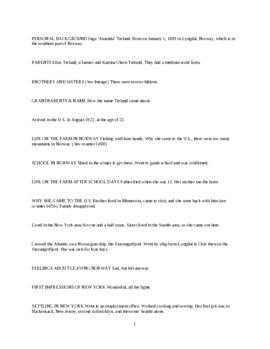 The interview was conducted with Amanda Nakkerud on May 27, 1981 at Pacific Lutheran University in Tacoma, Washington. It contains information about family background, emigration, work, marriage and family, and Norwegian heritage. The interview also contains an article on Amanda and her husband Trygve from the Western Viking (September 10, 1982). Also see Trygve Nakkerud, t57. This interview was conducted in English.

Amanda Nakkerud was born Inga Amanda Treland on January 1, 1899 in Lyngdal, Norway. Her parents were Elias Treland and Katrina Olsen, and she had six siblings: Salve, Ola, Gunhild, Johanna, Abraham, and Amanda. Elias was a farmer, and the family lived on a medium-sized farm. Amanda thought there were too many mountains in Norway, and when her brother, who lived in Minnesota, came to visit, Amanda decided to return to America with him. She lived in New York for a year and a half, where she cooked and served in several restaurants, and then moved to Seattle, Washington. Amanda had a sister in Seattle and obtained a housekeeping job through an employment office. She later went on to do hotel rooms, mainly at the Piedmont Hotel. Amanda married Trygve Nakkerud and had three children: Elise, Gladys, and Arnold. They owned a motel and lived there while they ran it. Norwegian Christmas traditions and foods were maintained in the household, and Amanda is a member of the Sons of Norway. She has returned to Norway eight times, but is glad she lives in the United States.