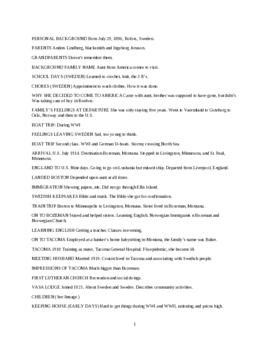 The interview was conducted with Ruth Nelson on July 1, 1981 in Tacoma, Washington. This interview contains information on personal background, life in Sweden, emigration, family, community life, and Swedish heritage. Also available are a photograph of Ruth and John Nelson on their 56th anniversary and a profile on them from the Tacoma News Tribune in regards to their 60th anniversary. Also see John Nelson. The interview was conducted in English with some Swedish towards the end of the interview.

Ruth Nelson was born Rut Otilla Lindberg on July 29, 1896 in Rofors, Sweden. Her father, Anders Lindberg, worked as a blacksmith to support Ruth's family, which included her mother, Ingeborg, and her five brothers and sisters. As a young girl, Ruth attended school to learn 'the 3 R's' and to learn domestic skills like crocheting and knitting. Her job for the family was to wash their clothes. Ruth had an aunt who lived in America; when she visited in 1914, Ruth decided to return to America with her. Assuring her family that she would only be gone five years, Ruth departed Sweden. She accompanied her aunt to Bozeman, Montana and arrived there in July of 1914. Ruth found work as a babysitter for a family in town. After living in Montana for a few years, Ruth moved to Tacoma, Washington. In 1918, she began nurse's training at Tacoma General Hospital. That year, she fell victim to the flu epidemic. In 1919, Ruth met John Nelson, and they married soon thereafter. Together, they had one daughter named Nancy. Ruth became very involved in her Lutheran church and in the Vasa Lodge, which she joined in 1921. She retains her heritage by cooking traditional Swedish fare, collecting Swedish plates, and occasionally speaking the language. Several times, her Swedish relatives, with whom she has kept close contact, have visited her. Ruth has returned to Sweden four times, but she regards America as her home.