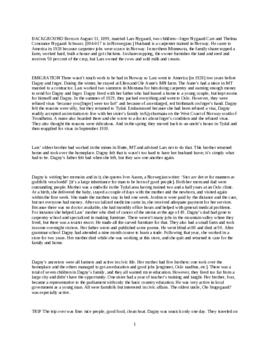 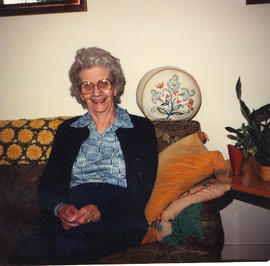 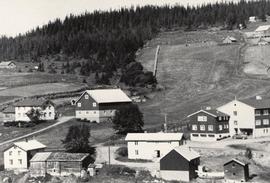 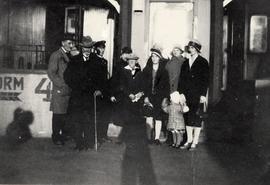 Dagny Bergitte Nygaard was born on August 31, 1899 in Tydal, Norway. Her parents were David Unsgaard and Berit Stuedal, and there were seven children in the family: Ingrid, Kair, Johannes, Inga, Peder, Dagny, and Ivar. Dagny's father had attended carpentry school and specialized in furniture-making, and her mother was trained as a midwife. Dagny married Lars Nygaard and had two children-Inger, born in Tydal, Norway, and Thelma, born in Grygla, MN. Lars was also a carpenter and immigrated to America in 1928 to find employment. He stayed at Ole and Ellen Aune's farm in Minnesota during the winter and spent the summers doing carpentry in Montana in order to earn enough money for Dagny and Inger to emigrate as well. Dagny and Inger emigrated in September 1930, and the family spent the first winter with the Aunes. The following spring they moved to Grygla, MN and sharecropped a farm. Lars also owned cows and sold the milk and cream. Learning the language was the hardest thing for Dagny to adjust to, but she especially learned after Inger began school. In Grygla, she also joined her church's Ladies Aid and was elected secretary, which helped her improve even more. On March 1, 1942, Lars went to the West Coast to find work in the shipyards, and Dagny and the girls joined him on the first of April. They moved to a small farm outside of Freeborn, WA, and Inger and Thelma attended school in Everett. While in America, Dagny continued to cook Norwegian food including risengrynsgroet, lutefisk, lefse, and flatbread. She also churned her own butter while living on the farm.