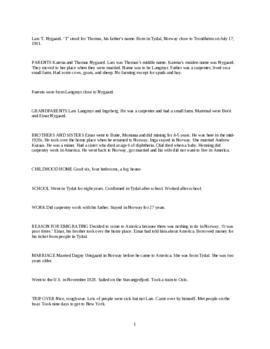 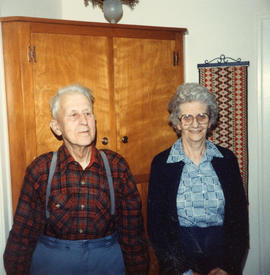 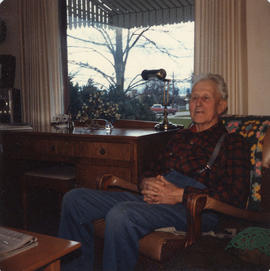 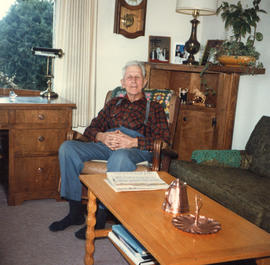 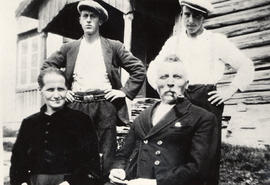 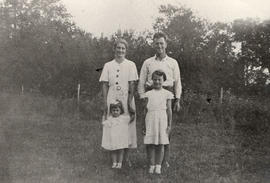 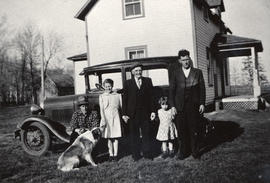 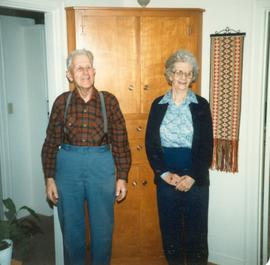 Lars Nygaard was born on July 17, 1901 in Tydal, Norway to Thomas Langmyr and Karena Nygaard. Lars was born on his mother's place, which is why he received her maiden name. He had five siblings: Einar, Inga, Henning, Torvald, and Tordis. Thomas was a carpenter, and the family lived on the same farm. Lars went to school in Tydal for eight years, after which he was confirmed and began working for his father. When he was 27 years old, he decided to immigrate to America. Einar, who had mined in Butte, Montana during the mid-1920s, advised him to do so. Before he left, Lars married Dagny Unsgaard, who was also from Tydal and two years older than him. Lars left Norway in November 1928, and it took nine days to reach Ellis Island. From there, he took the train to Middle River, Minnesota, where Karl Sagavold, the husband of Lars' mother's cousin, met him. Lars stayed with them until April and then went to Kevin, Montana, where his relatives in Minnesota had arranged carpentry work for him. After two years, Lars had earned enough money to send for Dagny and his daughter Inger, who was born several months after he left Norway. At this time, there was no more work for him in Montana, and he took his family to Minnesota and farmed for several years. In Minnesota, his second daughter, Thelma, was born. When World War II started, Lars moved his family to Stanwood, WA, where his father's cousin, Tom Helmer, and Henning lived. In Stanwood, Lars found work in the shipyards. After living with Tom for one year, Lars bought a house in Freeborn, WA, where the family resided until 1963. During this time, Lars continued to do carpentry work, and built house in Alaska as well as Washington. Lars is a member of Freeborn Lutheran Church, where he helped build the parsonage and has served on the council. He has returned to Norway in 1952 and 1965 and still speaks Norwegian at home sometimes.