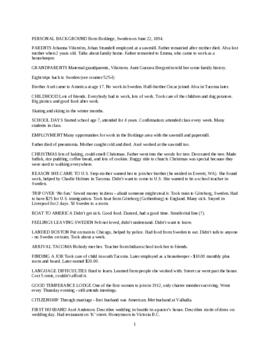 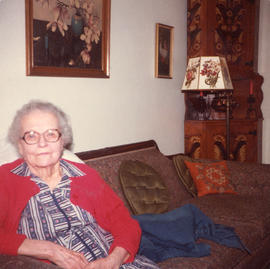 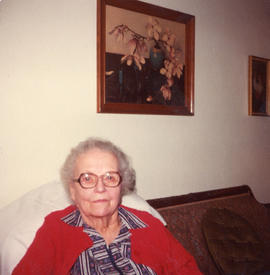 Alva Pearson was born Alva Strandell on June 22, 1894 in Borlänge, Sweden. She and her brother Axel lived with their parents, Johanna Vikström and Johan Strandell; her father was employed at a sawmill. When Alva was only two years old, her mother died and her father remarried a woman named Emma. Emma and Johan had one son named Oscar. Alva enjoyed her childhood in Sweden, working, going to school, skating, and skiing. The Christmas holiday was especially fun with the traditional cooking and decorating.

Alva's brother Axel moved to America around 1903, settling in Everett, Washington. When Alva's father died of pneumonia, her stepmother encouraged her to join Axel, even though Alva wanted to stay in Sweden and become a schoolteacher. On her way to America in 1910, Alva sewed her money in her dress for fear someone would steal it. Upon her arrival, she found work in Tacoma, first caring for children and then housekeeping. Alva was one of the first women to join the Good Temperance Lodge in 1912; she is the only charter member surviving.

Alva obtained her citizenship when she married an American named Axel Anderson who owned a restaurant. They had three children: Kathleen, Lennard, and Wally. Kathleen and Lennard worked during the Great Depression while Alva worked at Weyerhaeuser. Her husband fell ill and sold the restaurant; he died in 1949.

The following year, Alva married Dan Pearson, a Swedish man from the Valhalla Lodge who worked at a carpentry shop. Sadly, ten years later Dan died. Alva has remained in the Tacoma area and attends First Covenant Church. She has returned to Sweden eight times, and her children and some grandchildren can speak the language.