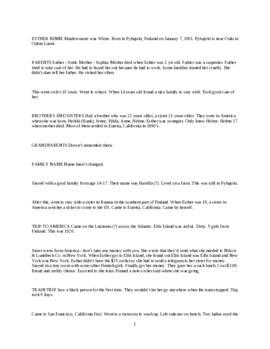 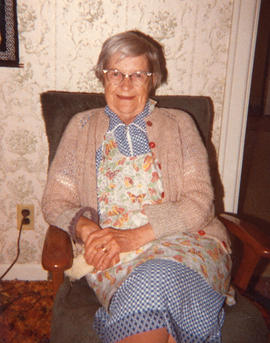 Esther Rinne was born on January 7, 1901 in Pyhajoki, Finland to Antti and Sophia Wiirre. Esther had five older siblings, but most of them had immigrated to Eureka, CA in the 1890s. When Esther was two years old, her mother passed away. Her father, who was a carpenter, tried to take care of her but had to board her out to different families for ten years while he worked. When Esther was nineteen, one of her sisters sent her a ticket to America. By the time Esther arrived in California, her sister, Anne, had already arranged a job for her. She began living and working at a cookhouse, where she washed dishes and waited tables. The language differences were a problem at first, but Esther remained at the cookhouse for two years. When she was granted a two-week vacation, Esther went to Astoria, OR to visit her sister, who ended up convincing Esther to stay. Esther found a job at a local restaurant and met her husband, Sulo Rinne, who was originally from Pirkkala, Finland. They had one son, but he died while serving in the military. In Astoria, Esther also joined the Peace Lutheran Church and American Legion Auxiliary. She has returned to Finland twice, but by the second trip, so many things had changed that she felt no need to return a third time. Esther likes living in America and has no special feelings about being Finnish.