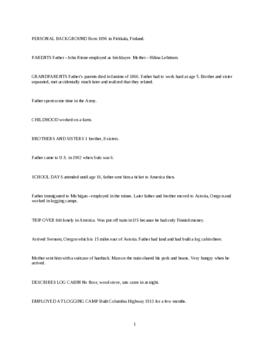 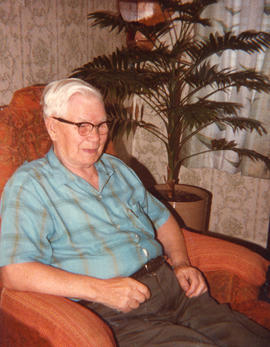 Box 4, File 2B Photographs and Clippings
One photograph
One clipping

Sulo Rinne was born on March 12, 1896 in Pirkkala, Finland to John Rinne and Hilma Lehtinen. Sulo was one of ten children. In 1902, Sulo's father immigrated to the United States, eventually settling in Astoria, Oregon, where he worked in the logging camps.

When Sulo was sixteen years old, his father sent him a ticket to America. Sulo lived with his father in Astoria and found work at a logging camp. The language differences initially caused many difficulties for Sulo, but he attended a one-room schoolhouse to learn the English language. Sulo met his wife, Esther, in Astoria and built a home for them in Gearhart, Oregon, near Astoria.

Sulo began fishing in the summer and working at the sawmills during the winter. He also joined Peace Lutheran Church in Astoria and the Finnish Brotherhood. He has returned to Finland three times, but by his last trip, everything had changed. Sulo has no special feelings about his Finnish heritage.