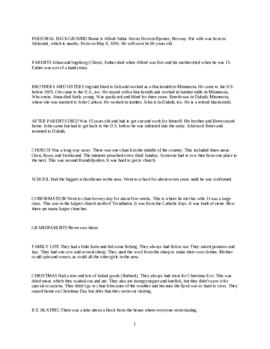 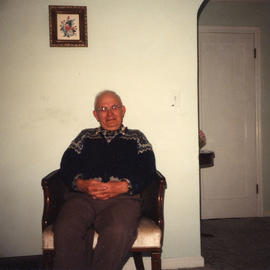 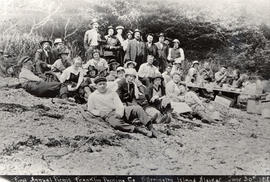 Alfred Strom was born on May 8, 1896, in Bjørnør, Norway, to Johan and Ingeborg Strom. In addition to Alfred, there were five other children in the family: Ole, Ingvald, Anna, Beret, and John. The family had a small farm and also did some fishing. Alfred's father died when Alfred was five years old, and ten years later Ingeborg also passed away. Having finished school and confirmation, Alfred went to work at his neighbor's farm, and all of his siblings immigrated to America. Alfred continued to farm until he was eighteen and then received a ticket to America from his brother John. From New York, Alfred took the train to his sister's house in Duluth, MN. Ole and John also lived in Duluth, where Ole was a streetcar conductor and John worked for a blacksmith. When Alfred arrived, jobs were hard to come by, but he eventually found work with the railroad in Superior, WI. He later became a helper in the foundry in Duluth. Around 1917, Alfred decided to go to Washington, where Ingvald had been living. In Tacoma, WA, he and Ingvald signed up to work at a packing company in Alaska and spent the next nine months in Prince William Sound, AK. On the way home, Alfred contracted a bad case of the flu and had to stay in St. Hans Hospital in Juneau, AK, for seven weeks. Ingvald, also sick, passed away. Alfred returned to Tacoma the week before Christmas and stayed there until he was strong enough to return to Duluth. When he finally returned to Duluth, he began working in a blacksmith shop and also went back to work in Alaska three or four more times. In 1922, Alfred and Ole Nerheim bought a restaurant in Tacoma, which Ole alone eventually took over. Alfred then returned to Duluth and the blacksmith shop. On this trip back, he met his wife, Anne Olsen, who was also from Bjørnør, Norway. They had two children, Ingvald and Ruth. They eventually settled in Tacoma, where Alfred worked for Dickman Lumber Co. for almost fifty years. Alfred is a member of the Sons of Norway, but attended more in Duluth than in Tacoma, and he has also made one trip back to Norway. According to Alfred, not much had changed.