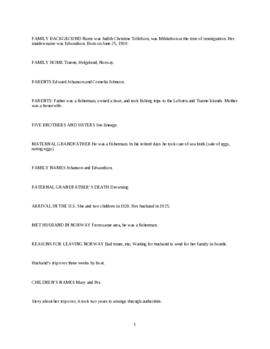 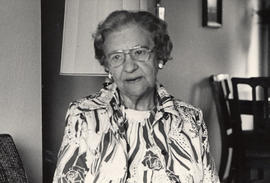 Judith Tollefson was born Judith Christine Edwardson on June 25, 1900 in Traena, Helgeland, Norway. Her parents were Edward and Cornelia Johanson, and Judith had five younger siblings: Christian, Alfred, Emilius, Alfa, and another brother who died in the flu epidemic. Judith's father was a fisherman and her mother a homemaker. In September 1928, Judith immigrated to America with her two children, Mary and Per. Her husband, Lars Mikkelson, had left in 1925 and had settled in Seattle, WA. Lars was a fisherman, and he was in Alaska when Judith and the children arrived. In 1931, the family bought a house in Bothell, WA, which they later lost during the Depression. At this time, Bothell had a large Scandinavian population, and all of the women helped one another while their husbands were out fishing. Social life revolved around church, and Judith became a member of Bothell First Lutheran. She learned much of her English from Sunday school papers. In Bothell, Judith also did housekeeping and worked in a restaurant to earn extra money. She and Lars also had another daughter. Lars passed away in 1962, and Judith remarried Julius Tollefson six years later. Julius is originally from Rognan, Norway. Judith's Norwegian heritage is very important to her, and she has kept this heritage alive while living in the United States. She continues to cook traditional Norwegian dishes, has returned to Norway five times, and is a member of the Daughters of Norway, and Nordlandslaget.