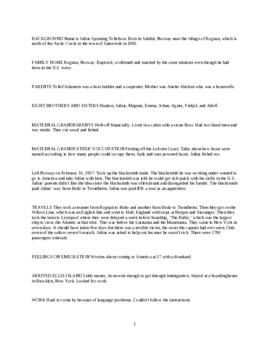 This interview was conducted with Julius Tollefson on May 7, 1981 in his Tacoma home. It contains information on family background, emigration, Scandinavian organizations, employment, family, and Norwegian heritage. The interview also contains two articles about Julius and his life experiences from the Tacoma News Tribune (December 2, 1979 and January 1, 1984). Also see Judith Tollefson. The interview was conducted in English.

Julius Tollefson was born on January 26, 1890 in Rognan, Norway to Tollef Johansen and Anette Abelsen. Tollef was a boat builder and carpenter, and Anette was a housewife. In addition to Julius, they had seven other children: Haakon, Magnus, Emma, Johan, Agnes, Fridjof, and Adolf. Julius immigrated to America on February 16, 1907. At that time, he was an apprentice for a blacksmith, who invited Julius to go to America with him. Language differences posed a problem for Julius when he first arrived, and he worked various jobs on the East Coast until coming to Tacoma, WA in May 1907. Julius's brother had been living in Tacoma for two years, and Julius soon found work there at a sawmill and later worked in lumber camps. In Tacoma, Julius also became involved with several Norwegian organizations, including the Norwegian Good Templars (Temperance), the Sons of Norway, Nordlandslaget, and the Ancient Order of Vikings. Julius held offices in Nordlandslaget and served as a trustee in the other groups. In the 1920s, Julius also helped with the building of Normanna Hall, where various Scandinavian clubs meet in Tacoma. At the time of this interview, Julius was working on his seventy-seventh year in the Sons of Norway, making him the longest continuous member in the United States. Julius considers his heritage very special. In addition to Norwegian organizations, Julius has also been active in church life and was a charter member of St. Mark's Lutheran Church in Tacoma. Julius has five children: Irene, Mildred, Emma, Telma, and John. His first wife, Inga, passed away, and he later remarried to Judith Mikkelsen.